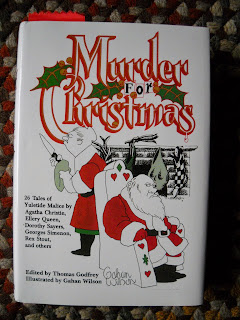 Murder for Christmas is a 1982 book of 26 short story mysteries edited by Thomas Godfrey and illustrated by Gahan Wilson. There's a wide variety here, something for everyone, quick and easy additions to holiday reading.


Here is a perfect Christmas gift for the person who has everything -and plans to leave it to you. Murder for Christmas contains twenty-six tales of seasonal malice to keep you in the Christmas spirit all year round.

It has been said that Christmas brings out the best in everyone, and this has been especially true of mystery writers who seem to have been inspired to their best work by the holiday season.

So come to a unique yuletide celebration and rub elbows with such greats as Sir Arthur Conan Doyle, Dame Agatha Christie, Rex Stout, and Ellery Queen, while Georges Simenon and Dame Ngaio Marsh drop a few hot coals into your stocking. Master of suspense John Collier and Stanley Elkin will be on hand with a few terrifying tales to send shivers up your spine. Thomas Hardy, Charles Dickens, and Baroness Orczy also will be present with some surprise contributions. There will be a few laughs, too, with Damon Runyon, Wyndham Lewis, and Woody Allen, as well as visits with old and new masters of the genre such as Margery Allingham, Dorothy L. Sayers, G.K. Chesterton, Edward D. Hoch, and H.R.F Keating. John Dickson Carr will favor us with a locked room story, while O. Henry contributes some Christmas criminality from the Old West. We'll even go Christmas shopping with Robert Louis Stevenson.

Best of all will be the presence of the great detectives of literature -Sherlock Holmes, Hercule Poirot, Nero Wolfe, Lord Peter Whimsey, Albert Campion, Jules Maigret, Father Brown, Roderick Alleyn, and Bombay's Ganesh Ghote -all tacking the kinds of cases that made them famous.

Murder for Christmas contains something for every taste -lying, cheating, shoplifting, stealing, spying kidnapping, and murder- in short, everything to make the holidays bright.

I had no luck finding reviews online, and the book seems to be out of print. That's a shame, as the collection of themed seasonal stories sounds like a real winner. I know I enjoyed it, and I don't usually read short stories.

Links to the individual stories that I was able to find online: