A Christmas Bowl of Smoking Bishop 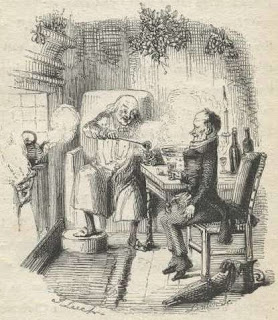 This is the part of Dickens' A Christmas Carol after Scrooge's conversion when he's trying to make amends. He tells his employee Bob Cratchit what he's planned and says,


...we will discuss your affairs this very afternoon, over a Christmas bowl of smoking bishop, Bob!

A perfect way to work out relationship problems, make restitution for past mistakes, and start a better way forward with someone, I think. Yes! Invite them to share a seasonal hot beverage.

Smoking Bishop is described by Wikipedia as "a type of mulled wine, punch or wassail". The Husband is a teetotaler, so we drink mulled cider instead. Here's our recipe:

We leave it on the stove, leave the spices and fruit in it, and ladle directly from the pot. We are a very informal family though, and you can strain it into a punch bowl and add fresh fruit -as we have done in the past- for a prettier service for a party. Serve with a cinnamon stick in each cup for extra flair.

Please join the T(ea) Tuesday festivities over at Bleubeard and Elizabeth's blog.
Posted by Divers and Sundry at 4:00 AM