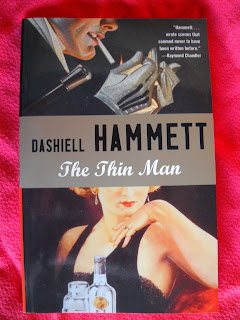 I thought I'd try to find some books to read that take place during the Christmas season. The first sentence in this book:

I was leaning against the bar in a speakeasy on Fifty-second Street, waiting for Nora to finish her Christmas shopping, when a girl got up from the table where she had been sitting with three other people and came over to me.

There! A Christmas book!

The Thin Man is a 1934 mystery novel by Dashiell Hammett. This is the last novel he finished. It's the basis for the William Powell/Myrna Loy film series. The book is an easy breazy read, although some of the social conventions of the day are disturbing in retrospect.

Nick and Nora Charles are Dashiell Hammett's most enchanting creations, a rich, glamorous couple who solve homicides in between wisecracks and martinis. At once knowing and unabashedly romantic, The Thin Man is a murder mystery that doubles as a sophisticated comedy of manners.

The Wall Street Journal says, "a careful reading of this novel ... reveals a still-sparkling comedy of manners within which lurks a vision of human affairs as grim as any social realist's." The Crime Segments says, "The core mystery is entertaining, and despite the twists and turns in the story, Hammett's writing is direct, witty and to the point" and concludes with this: "Highly and definitely recommended." GreatDetectives.net says, "it's amusing mix that features Dashiell Hammett's talents at his peak" but seems to like the movie better. MysteryFile.com says,

It would have been nice to come back to this fresh, not knowing the ending, just to see how well Hammett constructed this tricky mystery, a tale so well put together that one scarcely knows where to look among a cast of cleverly conceived (and, for the most part, sympathetically observed) suspects — or just what it is we’re looking for.