The Man with the Load of Mischief 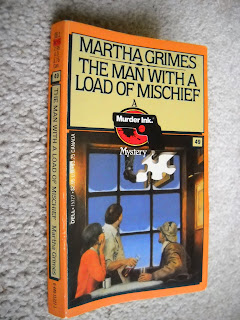 The Man with the Load of Mischief is a 1981 detective novel by Martha Grimes and is first in the Richard Jury series, which is ongoing and currently at 23 titles. I saved this book to read this month because it takes place over the Christmas holiday season and begins on December 19. It was a quick, enjoyable read, and I think I'll look for the rest. I've been advised to read them in order.

teaser from the book:

Long Piddleton had always been wary of newcomers, but the quiet town was stunned when the first stranger was found dead, upended in a butt of ale in the cellar of The Man with a load of Mischief. Then the second body appeared, swinging in place of the mechanical man above the door of the Jack and Hammer.

Suddenly, Long Piddleton had good reason to be wary of everyone! Its cozy pubs and inns with their polished pewter and blazing hearths had become the scenes of the most bizarre crimes. Who were the victims? And who was the murderer? A maniac? A stranger? Or the disarmingly friendly man next door?

The English inn stands permanently planted at the confluence of the roads of history, memory, and romance. Who has not, in his imagination leaned from its timbered galleries over the cobbled courtyard to watch the coaches pull in, the horses' breath fogging the air as they stamp on dark winter evenings? Who has not read of these long, squat buildings with mullioned windows; sunken, uneven floors; massive beams and walls hung round with copper; kitchens where joints once turned on spits and hams hung from ceilings. There by the fireplace the travelers of lesser quality might sit on wood stools or settles with cups of ale. There the bustling landlady sent the housemaids scurrying like mice to their duties. Battalions of chambermaids with lavendered sheets, scullions, footmen, drawers, stage-coachmen, and that Jack-of-all-trades called Boots waited to assist the travelers to and from the heavy oaken doors. Often he could not be sure whether the floor would be covered with hay, or what bodies might have to be stepped over or crept past on his way to breakfast, if he slept in an inner room. But the breakfast more than made up for the discomfort of the night, with kidney pies and pigeon pies, hot mutton pasties, tankards of ale, and muffins and tea, poached eggs and thick rashers of bacon.
....
The Man with the Load of Mischief was no exception -a half-timbered, sixteenth-century coaching inn through the archway of which Melrose Plant now drove his Bentley, parking it in the unused stableyard.


They stood now in the low, dimly lit hall, hung about with sporting prints and stuffed birds, his aunt and Simon Matchett making small talk smaller.

Kirkus Reviews says, "Grimes is working in the grand old English-village style--successfully recalling (without lapsing into parody) the humor of Marsh and Allingham, the red-herring smorgasbord of Christie, and some of the richer textures of Sayers."