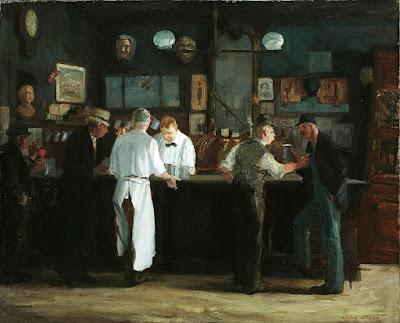 His students included Peggy Bacon, Aaron Bohrod, Alexander Calder, Reginald Marsh, Barnett Newman, Minna Citron, and Norman Raeben. In 1939, he published a book of his teachings and aphorisms, Gist of Art, which remained in print for over sixty years.

In American Visions, the critic Robert Hughes praised Sloan's art for "an honest humaneness, a frank sympathy, a refusal to flatten its figures into stereotypes of class misery ... He saw his people as part of larger totality, the carnal and cozy body of the city itself." In American Painting from the Armory Show to the Depression, art historian Milton Brown called Sloan "the outstanding figure of the Ash Can School." To his friend, the painter John Butler Yeats, and to art critic Henry McBride, he was "an American Hogarth."

The lobby of the United States Post Office in Bronxville, New York, features a mural by Sloan painted in 1939 and titled The Arrival of the First Mail in Bronxville in 1846 commissioned by the Treasury Section of Fine Arts. The post office and mural were listed on the National Register of Historic Places in 1988

Please share your own drink-related post and join me at Bluebeard and Elizabeth's T Stands for Tuesday blogger gathering.
Posted by Divers and Sundry at 2:00 AM