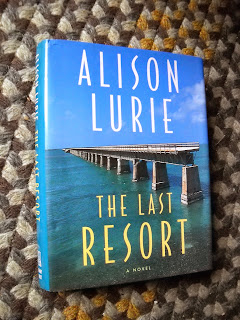 The Last Resort is a 1998 novel by Pulitzer Prize-winning author Alison Lurie. I generally enjoy Lurie's books, and I loved this one. Engaging, thought-provoking, and easy to read.


Like a loyal Victorian wife, Jenny had devoted her life to her much older husband, the famous writer and naturalist Wilkie Walker, bringing up their children and editing his best-selling books. But this year, as winter approaches, Wilkie is increasingly depressed and withdrawn. At her wit's , Jenny persuades him to visit Key West -the Last Resort.

But Key West is not called the Last Resort for nothing. Lives can turn upside down here, and even short-term visitors can have experiences they never imagined. Within weeks of their arrival, Jenny not only has a part-time job but is becoming involved with assorted local characters, including Gerry, an ex-beatnik poet, and Lee, the dramatically attractive manager of a women-only guest house. Wilkie, meanwhile, is planning his own "accidental" death by drowning -a task that turns out to be more difficult than he thought- and trying to avoid the attentions of a breathless young female fan.

The Last Resort is Pulitzer Prize winner Alison Lurie's first novel in ten years. It is a perfect evocation of Key West and another dazzling demonstration of Lurie's talent for high comedy and social comment.


She was reminded of a theory of her husband's, that travelers were always drawn to landscapes that echoed the internal geography of their minds. Calm, even-tempered, slightly lazy people felt most comfortable in the plains or beside clear, placid lakes. Somewhat more active types were at home among rolling hills and sparkling streams; while the extremely adventurous and intense responded instinctively to alpine cliffs and craggs and deep ravines and the pounding of towering cascades.


Maybe it's like Elizabeth Kubler-Ross's stages of dying, he thought. If death was what you'd expected and sought for months, the news that you weren't necessarily going to die soon produced the same series of emotions: first denial, then rage, then bargaining. After that there was nothing left but stage four, acceptance.


"When you get to be my age, you start thinking about your family. Like that Gauguin painting. Where do we come from, Who are we, Where are we going?"


...as you grow older and the future shrinks, you have only two choices: you can live in the fading past, or, like children do, in the bright full present.

The New York Times calls it "sparkling" and "smart". Publishers Weekly says it's "a perfect summer read: entertainment that is at once highly intelligent and mildly edifying." The Independent says, "This is a charming, sunny book that seems infused with all the warmth of its setting." Kirkus Reviews says it's "Beach reading with brains and bite".

I've also read Foreign Affairs and Truth and Consequences, both of which I liked. I started but did not finish Only Children, which is a family story told from the point of view of a nine year old girl; I don't tend to like books featuring child protagonists and gave up on it fairly soon.
Posted by Divers and Sundry at 4:00 AM