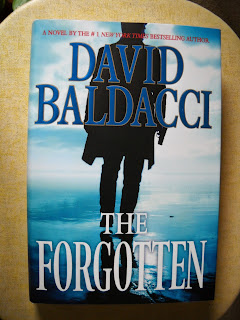 The Forgotten is a 2012 John Puller novel by David Baldacci, 2nd in a series. At 422 pages, I thought it would be longer -much longer- than I'd like a thriller to be; but the sentences are short, and the chapters are very short. It's a quick and easy read. There's a lot of repetition of phrases and images and descriptions. This plot is all over the place, involving human trafficking, murder, elder abuse, financial fraud, pedophilia, gangs, petty sexual jealousy when the strong male protagonist is pursued by two different women, conflicts between local police and the military, exercise routines among the fit, kidnapping, law-breaking by the law officers, rape, and a dog in need of kindness. Poor doggie. I'm sure I left out some things, but it was hard to keep up. Not that it was hard to keep up with the plot. No, that was all too simple to do. The characters were either throw-aways I didn't need to care about or were so annoying I didn't want to care about them. I just wanted to get through the book, and now I have.

You can read the first chapter at the author's web site. I'm not a fan of the writing style and won't read others by this author.


Army Special Agent John Puller is the best there is. A combat veteran, Puller is the man the U.S. Army relies on to investigate the toughest crimes facing the nation. Now he has a new case —but this time, the crime is personal: His aunt has been found dead in Paradise, Florida. A picture-perfect town on Florida’s Gulf Coast, Paradise thrives on the wealthy tourists and retirees drawn to its gorgeous weather and beaches. The local police have ruled his aunt’s death an unfortunate, tragic accident. But just before she died, she mailed a letter to Puller’s father, telling him that beneath its beautiful veneer, Paradise is not all it seems to be.

What Puller finds convinces him that his aunt’s death was no accident . . . and that the palm trees and sandy beaches of Paradise may hide a conspiracy so shocking that some will go to unthinkable lengths to make sure the truth is never revealed.

The Washington Post opens its review by saying the book is


a good example of a certain type of commercially successful novel. Its hero is a warrior and patriot who does battle against the forces of evil. Although often outnumbered by his enemies, and face-to-face with death, he never surrenders. Combat aside, he loves children, honors his father —himself a great warrior in his day— and sometimes dallies with women, but only if they leave him no choice. The book is a fantasy, a prose cartoon, but if you buy into its highly improbable plot, it’s readable enough and at times even exciting.

Kirkus Reviews closes with this: "A solid thriller—though someone tell the fact checker that Bulgaria was never part of the Soviet Union."
Posted by Divers and Sundry at 4:30 AM