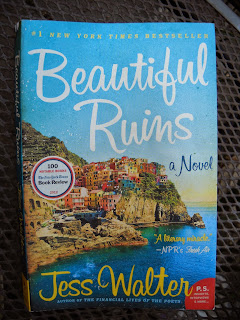 Beautiful Ruins is a 2012 novel by Jess Walter. It was on the New York Times list of Notable Books of the year. His book Citizen Vince (which I read years ago) won the Edgar Allen Poe Award for best novel in 2006. The man can write. I care about his characters, wishing them well.

From the moment it opens -on a rocky patch of Italian coastline, circa 1962, when a daydreaming young innkeeper looks out over the water and spies a mysterious woman approaching him on a boat -Jess Walter's Beautiful Ruins is a dazzling, yet deeply human, roller coaster of a novel. From the lavish set of Cleopatra to the shabby revelry of the Edinburgh Fringe Festival, to the back lots of contemporary Hollywood, Beautiful Ruins is gloriously inventive and constantly surprising -a story of flawed yet fascinating people navigating the rocky shores of their lives while clinging to their improbable dreams.

...he found himself inhabiting the vast, empty plateau where most people live, between boredom and contentment.

Weren't movies his generation's faith anyway -its true religion? Wasn't the theater our temple, the one place we enter separately but emerge from two hours later together, with the same experience, same guided emotions, same moral? A million schools taught ten million curricula, a million churches feature ten thousand sects with a billion sermons -but the same movie showed in every mall in the country. And we all saw it! That summer, the one you'll never forget, every movie house beamed the same set of thematic and narrative images -the same Avatar, same Harry Potter, same Fast and Furious, flickering pictures switched in our minds that replaced our own memories, archetypal stories that became our shared history, that taught us what to expect from life, that defined our values. What was that but a religion?

All we have is the story we tell. Everything we do, every decision we make, our strength, weakness, motivation, history, and character -what we believe- none of it is real; it's all part of the story we tell. But here's the thing: it's our goddamned story!

...in his estimation, the more you lived the more regret and longing you suffered, that life was a glorious catastrophe...

...the smaller the space between your desire and what is right, the happier you will be... ...how much easier life would be if our intentions and our desires could always be aligned.

It all happens so fast, you wake a young man and at lunch are middle aged and by dinner you can imagine your death. And you were happy?

There would seem to be nothing more obvious, more tangible and palpable than the present moment. And yet it eludes us completely. All the sadness of life lies in that fact. -Milan Kundera

Zombies are presented as a "pale, dull metaphor for love". The Donner Party even makes an appearance.

Kirkus Reviews opens its review by saying, "Hollywood operators and creative washouts collide across five decades and two continents in a brilliant, madcap meditation on fate" and closes with this: "Walter’s prose is a joy—funny, brash, witty and rich with ironic twists. He’s taken all of the tricks of the postmodern novel and scoured out the cynicism, making for a novel that's life-affirming but never saccharine. A superb romp." Paste Magazine delves into philosophy and closes by invoking some Big Names:

NPR has 2 reviews: This one says it "made me want to quit my job, move to L.A. and see the Hollywood train wreck up close"; this one describes it as "a sweeping stunner of a narrative that roams from Italy in the early 1960s to Hollywood and the American Heartland in the present" and says, "This novel is a standout not just because of the inventiveness of plot, but also because of its language".
Posted by Divers and Sundry at 4:30 AM