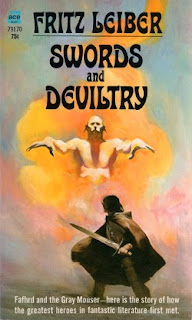 Swords and Deviltry is the first book in the Fafhrd and the Gray Mouser series by Fritz Leiber. There were 6 more books to follow, all but the last published in the 1970s with the last one not coming 'til 1988. I've had several of these books for decades but have never gotten around to them. It's time to fish or cut bait, so -before I donate them somewhere- I decided to actually read one of them. One of the tales, "Ill Met in Lankhmar", won the Hugo and the Nebula for best novella. I liked it fine but not enough to send me diving into all the others in the series. I'll keep them, though, and get around to the rest eventually.

The Fafhrd and Gray Mouser stories follow the lives of two larcenous but likable rogues as they adventure across the fantasy world of Nehwon. The pieces in Swords and Deviltry introduce the duo and their relationship ("Induction"), present incidents from their early lives in which they meet their first lady-loves (Fafhrd in "The Snow Women", the Gray Mouser in "The Unholy Grail"), and relate how afterwards in the city of Lankhmar the two met and allied themselves with each other, and lost their first loves through their defiance of the local Thieves' Guild ("Ill Met in Lankhmar").

Afterward loses too many battles to Too Late.

SF Site concludes, "If you like sword and sorcery, action-adventure in a pre-medieval world, then Fritz Leiber's Swords and Deviltry is an excellent addition to your collection." Stainless Steel Droppings says, "I am very impressed with Fritz Leiber’s work thus far and understand completely why it is proclaimed that he defined this genre with his work." Little Red Reviewer says,

Swords and Deviltry was deliciously, ridiculously, wonderfully, fun. It’s got all the adventure and banter and narrow escapes and rickety staircases and doomed romances and adventure and drunken banter and everything I love about adventure fantasy. If published today, this would be called dark fantasy.

The photo at the top of the post (which came from Wikipedia) is from the first edition of this book. I used it instead of a photo of my own book because my copy has more than one book included in it and doesn't even have this book's name on the cover.
Posted by Divers and Sundry at 4:30 AM