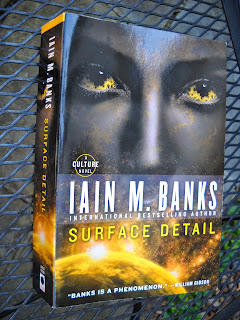 Surface Detail is a science fiction novel in the Culture series by Iain M. Banks. I'm a huge fan of this series, and I still mourn the recent and untimely death of the author. This book is a great addition to the series, with a view of the Culture's ruthlessness that doesn't show up in all the books.

It begins in the realm of the Real,
where matter still matters.
It begins with a murder.
And it will not end until the Culture has
gone to war with death itself.

Lededje Y'breq is one of the Intagliated, her marked body bearing witness to a family shame, her life belonging to a man whose lust for power is without limit. Prepared to risk everything for her freedom, her release, when it comes, is at a price, and to put things right she will need the help of the Culture.

Benevolent, enlightened and almost infinitely resourceful though it may be, the Culture can only do so much for any individual. With the assistance of one of its most powerful -and arguably deranged- warships, Lededje finds herself heading into a combat zone not even sure which side the Culture is really on. A war -brutal, far-reaching- is already raging within the digital realms that store the souls of the dead, and it's about to erupt into reality.

It started in the realm of the Real and that is where it will end. It will touch countless lives and affect entire civilizations, but at the center of it all is a young woman whose need for revenge masks another motive altogether


Strange Horizons closes with this:


That a Culture novel is flabby, digressive, and mired in surplus bits of SFnal invention and philosophical musings is only to be expected, and sometimes part of the fun. That it does all these things in the service of such a mealy-mouthed message is profoundly disappointing. It's admirable that Banks is trying to find new things to say about the Culture and new ways to expand the series's universe, but judging by Surface Detail, he hasn't yet figured out how to do so successfully.

io9 calls it "some of the best work he's done in his galaxy-spanning Culture universe." The Guardian says, "the novel's real power lies in the absorbing questions it poses about the value of the real, as opposed to the virtual, about who or what is expendable, and whether a society is better held together by threats or by promises." The Independent says, "In spite of the horrors Banks gives us here, the general effect of this book is entertainment" and suggests you can start here in the series but will be better served reading others first. The LA Times says, "Culture fans will enjoy "Surface Detail," but others may wish for fewer layers and a little more depth."