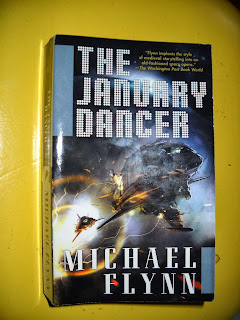 The Husband gave me a knee-high stack of books for Christmas, and this is one of them. The January Dancer, by Michael Flynn, is the first in the Spiral Arm series. I'm impressed. It's a fun read. I enjoyed it tremendously and am looking forward to the others.

Hugo Award finalist and Robert A. Heinlein Award-winning SF writer Michael Flynn now turns to space opera in The January Dancer, with stunningly successful results. Full of rich echoes of the space opera classics from Doc Smith to Cordwainer Smith, it tells the fateful story of an ancient pre-human artifact of great power, and the people who seek it. Starting with Captain Amos January, who quickly loses it, and then the others who fight, scheme, and kill to get it, we travel around the complex, decadent, brawling, mongrelized interstellar human civilization it might save or destroy, following the searchers for it. Collectors want the Dancer; pirates take it; rulers crave it, and they’ll all kill if necessary to get it.

This is as thrilling a yarn as any ever in the whole history of SF. This is a story of love, revolution, music, and mystery, and ends, as all great stories do, with shock and a beginning.

SF Signal didn't like it, giving it 1 1/2 out of 5 stars, but they faulted the political back story, which I liked. They praised the prose, while calling the book a "chore" to read. I agree with them about the prose: "On the bright side, Flynn’s prose is well structured —some might say poetic— and sometimes humorous".

Kirkus Reviews says, "Flynn ably tracks the intersecting orbits of his assassins, pirates and would-be kings, constructing a plot with the human density of a Brazilian favela". The SF Site review calls it "first and foremost, an entertaining Science Fiction novel of the old sort" and "a fine space opera with a quite satisfying central mystery, and with a setting that could be reused for further worthwhile novels". SF Revu closes with this:

My complaints of a large cast aside, The January Dancer offers a full and detailed story arc, a fabulous future galaxy to play in, and a race of humans who are are trying to save what they can remember of ancient earth. If you enjoy space operas told from many points of view, you might get a kick out Michael Flynn's The January Dancer.