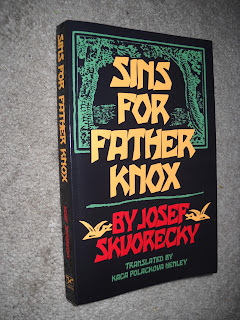 Sins for Father Knox by Josef Skuorecky is a collection of mystery short stories. There's an instructional component here, though, and I found myself put out by it instead of enjoying it as I had thought I would. Each story breaks one of the 10 Commandments of detective fiction writing as set forth in 1929 by priest and writer Ronald Knox:


I. The criminal must be someone mentioned in the early part of the story, but must not be anyone whose thoughts the reader has been allowed to follow;
II. All supernatural or preternatural agencies are ruled out as a matter of course;
III. No more than one secret room or passage is allowable. I would add that a secret passage should not be brought in at all unless the action takes place in the kind of house where such devices might be expected;
IV. No hitherto undiscovered poisons may be used, nor any appliance which will need a long scientific explanation at the end;
V. No Chinaman must figure into the story*;
VI. No accident must ever help the detective, nor must he ever have an unaccountable intuition which proves to be right;
VII. The detective must not, himself, commit the crime;
VIII. The detective must not light on any clues which are not instantly produced for the inspection of the reader;
IX. The stupid friend of the detective, the Watson, must not conceal any thoughts which pass through his mind; his intelligence must be slightly, but only very slightly, below that of the average reader;
X. Twin brothers, and doubles generally, must not appear unless we have been duly prepared for them

*In Msgr. Knox's time, one of the most overused plot mechanisms was the introduction of "a Chinaman" or other foreign, exotic or otherwise unusual character from "another land" as the malefactor. This comment was not intended as a "racist" one, but as a reaction to this plotting mechanism.

At some point during each story the author interrupts to tell you that you should now have all the information needed to solve the mystery. Then, you're supposed to guess which commandment was broken. I'm just not a fan of this device. I don't read mysteries with an eye towards solving them. I found myself not enjoying the stories at all, thinking of them solely as methods to illustrate the broken rule. This is just not my cuppa tea.

A clergyman named Ronald A. Knox once set forth a set of rules for writing detective fiction. In ten new stories (two featuring Lieutenant Boruvka), a crime occurs that violates one of Father Knox's rules, thus serving up a double challenge: Who dunnit? and Which rule was broken?

Kirkus Reviews describes it as "offbeat, faintly tongue-in-cheek entertainment for aficionados of classic puzzlers in the Ellery Queen tradition".
Posted by Divers and Sundry at 6:30 AM