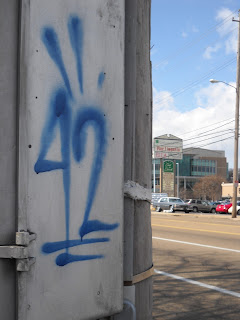 I found another 42 the other day, bet getting a picture of it proved a bit too exciting to suit me.

Standing at the corner while I waited for my walk signal, a car came up to the intersection and stopped at their red light. As my pedestrian crossing light came on and I stepped out into the intersection, this entitled SUV-driving idiot brushed past me turning right. She bumped me enough to make a sound against her vehicle, but she didn't stop. In fact she sped up and crossed into a further lane of traffic on Poplar so quickly I was unable to get the license number.

Then a few days after this happened to me, The Younger Son was brushed once and almost hit again by cars on his way home. The first car turned right onto Goodlett from the east-bound left-turn lane on Southern against the light and leaned on the horn as he brushed The Younger Son in the crosswalk. The second car almost hit him turning right on red out of the Dixon Art Gallery parking lot while The Younger Son was walking with the light. He doesn't think that second car ever even saw him.

Just for the information of anybody reading this who doesn't already know:


Right on red after stop does NOT mean you can run over pedestrians as you turn!
What is it with these people? They are totally self-absorbed and unconcerned about anything that doesn't directly affect them. Well, if I could get you convicted of a hit and run, that would affect you! But I bet you'd claim that you hitting me with your SUV while I was walking in a pedestrian crosswalk with the light while you should have been yielding at your red light was somehow my fault.

If police cars aren't safe from the careless self-centered disregard of SUV drivers, what hope does a pedestrian have?

I swear, I think driving SUVs should require a special license and annual driving tests in traffic with bikes and pedestrians, and should be limited to people with souls.