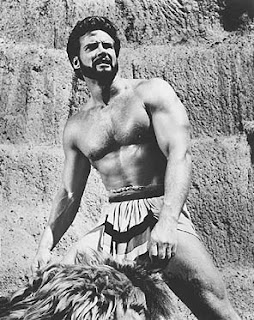 I remember Steve Reeves with great fondness from watching his films on television when I was a child. Today is the anniversary of his death from complications while undergoing treatment for lymphoma in 2000. The New York Times has a nice obituary. Stomp Tokyo has an overview.

There is information on his career as a bodybuilder here (nice picture and a history) and here (contest history and filmography). There is a Steve Reeves International Society. His acting career is best remembered for his roles in various "sword and sandal" movies. There's not much in the way of film criticism about him online -that I can find, anyway.

As I blog the films I'll link them here:

The image at the top of the post came from the Meeker Museum ("Dedicated to the pursuit of inner peace through movie stars") tribute page, which appears to be gone now.
Posted by Divers and Sundry at 6:30 AM