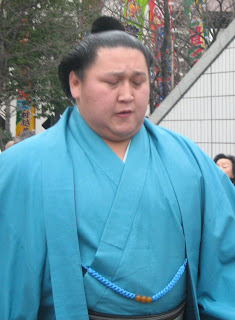 The Bangkock Post reports: "Mongolian-born Kyokutenho on Sunday became the oldest wrestler in modern times to win his first career sumo title, beating the previous record set in 1929." The Daily Yomiuri adds, "The championship makes him the fourth Mongolia-born wrestler and the 10th foreign-born wrestler to win." From Japan Today:

Unheralded veteran Kyokutenho of Mongolia won the Summer Grand Sumo Tournament on Sunday, capturing his first Emperor’s Cup with a win over Tochiozan in a championship playoff.


The picture at the top of the post is from Wikipedia.
Posted by Divers and Sundry at 12:30 PM