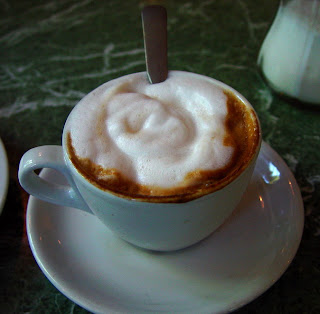 The Daughter and I decided to try out the #3 suggestion from the I Love Memphis blog list of 365 things to do in Memphis: Drink a Viennese. Neither of us had ever been to Cafe Eclectic before. We saw a sign that said to go inside to be seated on the patio. We went inside and were seated on the patio by a pleasant young man who said he would tell our waitress we were out there.

20 minutes later we were still waiting. A couple was brought out and seated at the next table, and right after that a waitress came to our table telling us that there were just 2 of them there and that it was "just crazy" inside. It hadn't seemed that busy to us, but maybe the craziness wasn't related to an over-abundance of customers. Other customers came and went while we were there and the staff wasn't too busy to help them. We felt like probably what had happened was that either she had been told about us and then remembered us only when the 2nd couple was seated or she hadn't been told about us until the 2nd couple was seated on the patio at about 2:00. Whatever happened, 20 minutes is a long time to wait to be approached by a waitress.

When we ordered our coffees we were informed that the espresso machine was out and was being worked on right then but that we could order the house coffee instead. And did we want to order snacks. She didn't much seem to care whether we stayed or went or ever came back. Bummer.

We went elsewhere instead. I honestly don't see us going back. There are so many coffee shops and restaurants that I don't feel very motivated to give Cafe Eclectic another try.

The photo at the top of this post is from Wikipedia and doesn't represent a drink provided by Cafe Eclectic for obvious reasons.
Posted by Divers and Sundry at 6:30 AM