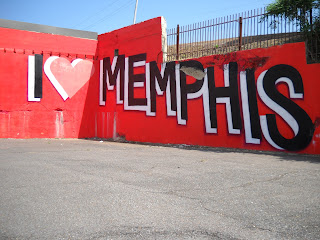 One afternoon during Music Fest, The Daughter and I went to take our pictures in front of the I Love Memphis mural in Cooper-Young. This is #14 on the I Love Memphis blog's list of 365 things to do in Memphis. The mural is a project of the Urban Art Commission, the Convention and Vistors Bureau and the City of Memphis. Nobody will confuse the mural with Fine Art, but it's a fine art decoration for a blank concrete wall, and we think it's fun.

While we were there a guy pulled up, got out of his car, and asked if we'd mind taking his picture. The Daughter's eyes are younger by far than mine, so she took it. He asked if we were tourists, too, and I said that, no, we live here. We really do love Memphis. He laughed and said that he comes to Memphis 2 or 3 times a year and loves it here. I was so glad we were able to take his picture for him.
Posted by Divers and Sundry at 6:30 AM