The moths pictured below have nothing to do with the film, but they stayed on the patio door the whole time we were watching Coraline, and we thought they added a whole 'nother dimension of creepy to the experience. 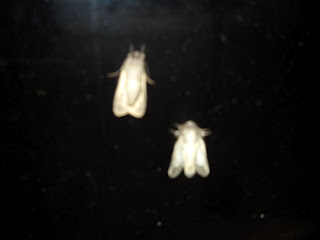 I can't get over how creepy this movie is. It's rated PG. I wasn't expecting it to be so very creepy. I asked The Husband, "How old do you think a child would have to be before they could watch this without having nightmares?" His answer: "57". I liked the movie, I did, but it was unexpectedly creepy in very creepy ways.

Coraline is a 2009 film done in stop-motion animation. The Younger Son said, "Now you can't say you've never seen a stop-motion VW Beetle." It's based on a Neil Gaiman book by the same name and is directed by Henry Selick.


Rotten Tomatoes gives it 90%. Slant Magazine gives it 3 out of 4 stars and opens with this: "As fine-looking a 3D stop-motion fantasy that four years of top-flight craftsmanship can produce, Coraline offers a steady diet of artful, kinetic stimulation." EW gives it an "A" and says,


This thrilling stop-motion animated adventure is a high point in Selick's career of creating handcrafted wonderlands of beauty blended with deep, disconcerting creepiness.

Roger Ebert warns, "This is nightmare fodder for children, however brave, under a certain age." and adds, ""Coraline" is disturbing not for gory images but for the story it tells." SF Gate opens their review by saying,


The deepest virtues of "Coraline" are dark. This seemingly innocuous 3-D animation presents a grim vision of the modern family - as something to escape from - and shows the imagination as something too terrifying and self-consuming to offer refuge. That the movie does all this from within the confines of the children's-film genre makes it all the more eerie and unconsciously evocative.