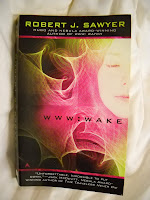 WWW: Wake is the first book in a science fiction trilogy by Robert Sawyer. The 2nd book is only available in hardback, and the 3rd is not yet published. Reading this book reminds me why I don't usually read series books until at least the first few are out, and, in the case of a trilogy, until all are published. It'll be a year, I imagine, until the 2nd one is out in paperback, and by the time I can pick up the 3rd I'll have forgotten the first one completely. I'm sure the subplots will eventually weave together, but in this book they are disconnected completely.

I don't usually like child/teen protagonists, but I did enjoy this book. I found the idea of an intelligence living in the web fascinating.

Caitlin Decter is young, pretty, feisty, a genius at math - and blind. Still, she can surf the net with the best of them, following its complex paths clearly in her mind.

When a Japanese researcher develops a new signal-processing implant that might give her sight, she jumps at the chance, flying to Tokyo for the operation.

But Caitlin's brain long ago co-opted her primary visual cortex to help her navigate online. Once the implant is activated, instead of seeing reality, the landscape of the World Wide Web explodes into her consciousness, spreading out all around her in a riot of colors and shapes. While exploring this amazing realm, she discovers something - some other - lurking in the background. And it's getting smarter...

SF Signal says, "Wake is ultimately a very good story that has me eagerly wondering what comes next. " The review at SFSite says, "Sawyer is an author who's not afraid to make his readers think."
Posted by Divers and Sundry at 2:00 PM