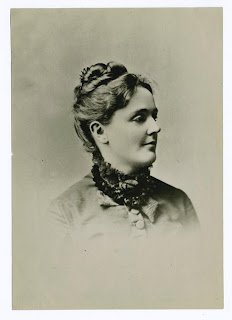 Today is the anniversary of the death in 1909 of author Sarah Orne Jewett. I ran across her book The Country of the Pointed Firs on a sale rack years ago and bought it because the book itself was a beautiful edition. When I read it, I loved it. It seems to be considered her best work. Wikipedia says of it, "The novel can be read as a study of the effects of isolation and hardship experienced by the inhabitants of the decaying fishing villages along the Maine coast." It is not plot-driven or action-filled, and that's the truth. I found the language striking. You can read the book online at several sites.

She was born in South Berwick, Maine, where her home is a museum. The Historic New England site says she "spent much of her life in this stately Georgian residence, owned by her family since 1819." South Berwick has a walking tour ("A visitor to contemporary South Berwick can follow in Sarah's footsteps and see much of the built and natural environment that shaped her life and influenced her writing"). There is a Sarah Orne Jewett Text Project, which "contains the complete, known published works of Sarah Orne Jewett, with the exception of a very small number of hard-to-find items."
Posted by Divers and Sundry at 7:00 PM