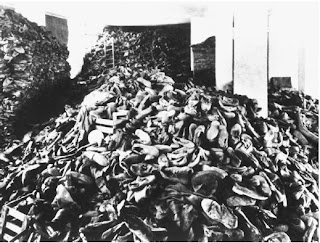 The Younger Son is taking an Intro to Film class this semester, and they watched Night and Fog (1955) during the first class. He had seen it before, so it must be around here somewhere, but I found it online at GoogleVideo here: and here and at youtube in 8 sections here. [All of these videos have been removed.]

Vimeo has it here.

Sadly, I can't even find a trailer online.


We pretend it all happened only once, at a given time and place. We turn a blind eye to what surrounds us and a deaf ear to humanity's never-ending cry.

It's a French documentary short film directed by Alain Resnais about life in the Auschwitz and Majdanek prison camps. TCM and MSN have overviews. FilmReference.com is dissatisfied with the way the difficult material was addressed and, in some cases, not addressed. Senses of Cinema says,

Commentators have generally agreed that it is precisely Resnais' obsession with and mastery of form that gives Nuit et brouillard an emotional power unequalled by any fictional reconstruction of the Holocaust.

The picture at the top of the post is one I saw uncredited on several web sites.

10/11/2009: Film of the Year has an article that concludes, "For realizing the unexpected potential of a performative historical documentary in the short subject format through 1955 Night and Fog is about as accomplished a film as we can hope to find."
Posted by Divers and Sundry at 1:30 PM

Labels: 1001 Movies You Must See Before You Die, Film, History, video