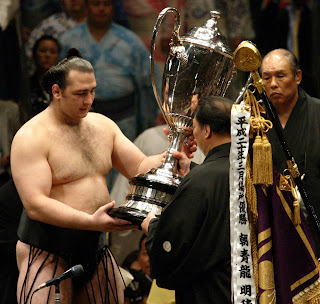 The winner of the Emperor's Cup in the summer tournament is Bulgarian-born Kotooshu, the first European to win that prize.

Kotooshu capped his first Emperor's Cup with a 14th win at the Summer Grand Sumo Tournament on Sunday, beating fellow ozeki Chiyotaikai to end two weeks of drama in Tokyo on a high.

With 13 wins and just one defeat on day 14 of the 15-day tournament, he is now guaranteed victory.

"It's so delightful. I can't find right words to express my feeling," the beaming 25-year-old told reporters.

"I just concentrated on my sumo. That's all."

Kotooshu, whose real name is Kaloyan Mahlyanov, said: "I can't believe it. I've let so many chances slip through my hands before". He became the seventh foreign wrestler to win a tournament. The two reigning grand champions are Mongolian.

Kotooshu, from a village near the city of Veliko Tarnovo, was a European champion at Greco-Roman wrestling by the age of 14, and was expected to compete in the 2000 Olympics until he was spotted by his current stable master, Sadogatake, who persuaded him that his bulk was better suited to the sumo ring.

International Herald Tribune
The Mirror has a story and video.

The photo above is by Morio and is from Wikipedia.

"I have no words to express. I am so happy. I finally did it," said Kotooshu, who took 34 tournaments from his sumo debut to win the Emperor's Cup.

Kotooshu entered the meet with one goal in mind getting a majority of wins to maintain his ozeki status. But the 25-year-old has been on fire, conquering both yokozuna en route to matching his previous best winning streak of 12-0 as a sekiwake at the 2005 autumn basho.

Posted by Divers and Sundry at 9:06 AM