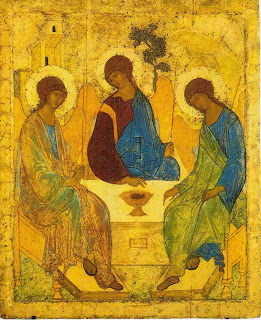 The Sunday after Pentecost is Trinity Sunday, which celebrates this central Christian doctrine.

There is but one living and true God, everlasting, without body or parts, of infinite power, wisdom, and goodness; the maker and preserver of all things, both visible and invisible. And in unity of this Godhead there are three persons, of one substance, power, and eternity—the Father, the Son, and the Holy Ghost.

The Athanasian Creed is an ancient creed of the church and affirms this belief:

Whoever wants to be saved should above all cling to the catholic faith.

Whoever does not guard it whole and inviolable will doubtless perish eternally.

Now this is the catholic faith: We worship one God in trinity and the Trinity in unity, neither confusing the persons nor dividing the divine being.

For the Father is one person, the Son is another, and the Spirit is still another.

But the deity of the Father, Son, and Holy Spirit is one, equal in glory, coeternal in majesty.

What the Father is, the Son is, and so is the Holy Spirit.

And yet there are not three eternal beings, but one who is eternal;

And yet there are not three almighty beings, but one who is almighty.

And yet there are not three gods, but one God.

And yet there are not three lords, but one Lord.

As Christian truth compels us to acknowledge each distinct person as God and Lord, so catholic religion forbids us to say that there are three gods or lords.

The Father was neither made nor created nor begotten;

the Son was neither made nor created, but was alone begotten of the Father;

the Spirit was neither made nor created, but is proceeding from the Father and the Son.

And in this Trinity, no one is before or after, greater or less than the other;

but all three persons are in themselves, coeternal and coequal; and so we must worship the Trinity in unity and the one God in three persons.

Whoever wants to be saved should think thus about the Trinity.

It is necessary for eternal salvation that one also faithfully believe that our Lord Jesus Christ became flesh.

For this is the true faith that we believe and confess: That our Lord Jesus Christ, God's Son, is both God and man.

existing fully as God, and fully as man with a rational soul and a human body;

Although he is God and man, he is not divided, but is one Christ.

He is united because God has taken humanity into himself; he does not transform deity into humanity.

He is completely one in the unity of his person, without confusing his natures.

For as the rational soul and body are one person, so the one Christ is God and man.

He suffered death for our salvation.

He descended into hell and rose again from the dead.

He ascended into heaven and is seated at the right hand of the Father.

He will come again to judge the living and the dead.

At his coming all people shall rise bodily to give an account of their own deeds.

Those who have done good will enter eternal life,

those who have done evil will enter eternal fire.

This is the catholic faith.

One cannot be saved without believing this firmly and faithfully.

The picture is Andrei Rublev's "Trinity"
Posted by Divers and Sundry at 5:50 AM