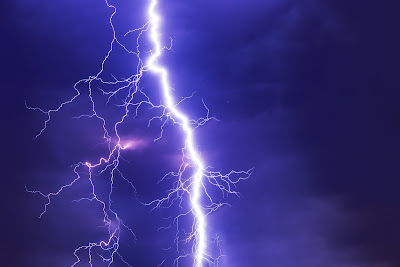 The Lightning-Rod Man is a short story by Herman Melville. You can read it online here or here. You can listen to it read to you at the bottom of this post. It begins,

What grand irregular thunder, thought I, standing on my hearthstone among the Acroceraunian hills, as the scattered bolts boomed overhead and crashed down among the valleys, every bolt followed by zigzag irradiations, and swift slants of sharp rain, which audibly rang, like a charge of spear-points, on my low shingled roof. I suppose, though, that the mountains hereabouts break and churn up the thunder, so that it is far more glorious here than on the plain. Hark! -- some one at the door. Who is this that chooses a time of thunder for making calls? And why don't he, man-fashion, use the knocker, instead of making that doleful undertaker's clatter with his fist against the hollow panel? But let him in. Ah, here he comes. "Good day, sir:" an entire stranger. "Pray be seated." What is that strange-looking walking-stick he carries: "A fine thunder-storm, sir."

"You are wet. Stand here on the hearth before the fire."

The stranger still stood in the exact middle of the cottage, where he had first planted himself. His singularity impelled a closer scrutiny. A lean, gloomy figure. Hair dark and lank, mattedly streaked over his brow. His sunken pitfalls of eyes were ringed by indigo halos, and played with an innocuous sort of lightning: the gleam without the bolt. The whole man was dripping. He stood in a puddle on the bare oak floor: his strange-walking stick vertically resting at his side.

It was a polished copper rod, four feet long, lengthwise attached to a neat wooden staff, by insertion into two balls of greenish glass, ringed with copper bands. The metal rod terminated at the top tripodwise, in three keen tines, brightly gilt. He held the thing by the wooden part alone.

"Sir," said I, bowing politely, "have I the honor of a visit from that illustrious God, Jupiter Tonans? So stood he in the Greek statue of old, grasping the lightning-bolt. If you be he, or his viceroy, I have to thank you for this noble storm you have brewed among our mountains. Listen: that was a glorious peal. Ah, to a lover of the majestic, it is a good thing to have the Thunderer himself in one's cottage. The thunder grows finer for that. But pray be seated. This old rush- bottomed arm-chair, I grant, is a poor substitute for your evergreen throne on Olympus; but, condescend to be seated."

While I thus pleasantly spoke, the stranger eyed me, half in wonder, and half in a strange sort of horror; but did not move a foot.

"Do, sir, be seated; you need to be dried ere going forth again."

I planted the chair invitingly on the broad hearth, where a little fire had been kindled that afternoon to dissipate the dampness, not the cold; for it was early in the month of September.

But without heeding my solicitation, and still standing in the middle of the floor, the stranger gazed at me portentously and spoke.

"Sir," said he, "excuse me; but instead of my accepting your invitation to be seated on the hearth there, I solemnly warn you, that you had best accept mine, and stand with me in the middle of the room. Good Heavens!" he cried, starting -- "there is another of those awful crashes. I warn you, sir, quit the hearth."