Wolves of the Calla, The Dark Tower, book 5 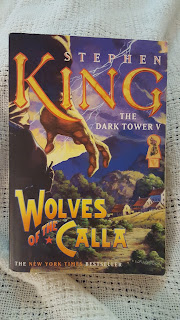 Wolves of the Calla is book 5 in Stephen King's Dark Tower series. This one was long. Very long. I enjoyed it, but I'm losing hope of finishing the series before the film comes out.

There's nothing on the back of the book by way of plot information, so I offer this from Wikipedia:

This book continues the story of Roland Deschain, Eddie Dean, Susannah Dean, Jake Chambers, and Oy as they make their way toward the Dark Tower.

The full plot description there is too detailed to include here.

New readers are advised to start at the beginning, but to recap, briefly, this extended dark fantasy features Roland Deschain, sixgun-toting knight errant in an apocalyptic, Sergio Leone desert world, and his quest to reach the threatened Dark Tower, which is some kind of linchpin holding reality together. The stark, compelling Gunslinger pits Roland against a mysterious "man in black", who demands that our hero betrays a boy-child he loves, and in return tells him his fortune in Tarot cards. The next episodes - The Drawing Of The Three; The Waste Lands; Wizard and Glass - are more conventionally Stephen King in style and girth, and move gropingly, almost blindly, through picaresque adventure towards a sense of what Roland's quest may mean.

The New York Times has a mixed review. SF Site said, "Stephen King's fifth book in The Dark Tower cycle ... is as strange, powerfully written and utterly weird as it predecessors, but foremost, it is King's tribute to the great action films and cultural archetypes that descended from Kurosawa's magnum opus". Fantasy Book Review says, "If you've enjoyed the previous four books in the series then you will not be disappointed with number five. As was the case with Wizard and Glass, it is almost a self-contained story, complete with a whole new set of new and memorable characters." Publishers Weekly says, "The high suspense and extensive character development here (especially concerning Jake's coming-of-age), plus the enormity of King's ever-expanding universe, will surely keep his "Constant Readers" in awe."