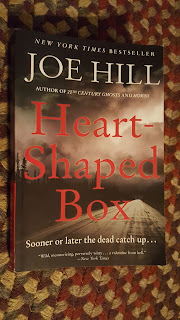 Heart-Shaped Box, the award-winning debut novel of Joe Hill, is a 2007 ghost story/revenge tale. I don't read much horror at all but always include something from that genre in my reading for October. This was perfect for me. I'll probably look for others by this author.


Aging death-metal rock legend Judas Coyne is a collector of the macabre: a cookbook for cannibals... a used hangman's noose... a snuff film. But nothing he possesses is as unique or as dreadful as his latest purchase off the Internet: a one-of-a-kind curiosity that arrives at his door in a black heart-shaped box... a musty dead man's suit still inhabited by the spirit of it's late owner. And now everywhere Judas Coyne goes, the old man is there -watching, waiting, dangling a razor blade on a chain from his bony hand.

The New York Times calls it "a wild, mesmerizing, perversely witty tale of horror" and says,


In a book much too smart to sound like the work of a neophyte, he builds character invitingly and plants an otherworldly surprise around every corner. It would be much easier to compare Mr. Hill’s work to Stephen King’s if Stephen King were not his actual father. (His full name is Joseph Hillstrom King.)

Time Magazine says it's "a top-notch piece of horror fiction". Strange Horizons calls it "a good novel and worth reading" but "conventional". Kirkus Reviews concludes, "He’s got horror down pat, and his debut is hair-raising fun."

The title comes from the Nirvana song: