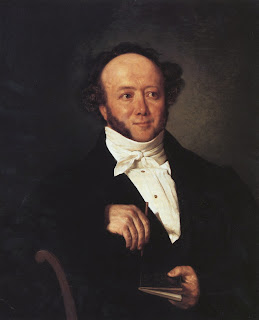 The Black Spider is an 1842 novella by Swiss author Jeremias Gotthelf (photo above), his best-known work. An introduction and the first part of the book can be read online here. It's a story within a story, with the frame tale being the celebration of an infant baptism.

The sun rose over the hills, shone with clear majesty down into a friendly, narrow valley and awakened to joyful consciousness the beings who are created to enjoy the sunlight of their life. From the sun-gilt forest’s edge the thrush burst forth in her morning song, while between sparkling flowers in dew-laden grass the yearning quail could be heard joining in with its love-song; above dark pine tops eager crows were performing their nuptial dance or cawing delicate cradle songs over the thorny beds of their fledgeless young.

In the middle of the sun-drenched hillside nature had placed a fertile, sheltered, level piece of ground; here stood a fine house, stately and shining, surrounded by a splendid orchard, where a few tall apple trees were still displaying their finery of late blossom; the luxuriant grass, which was watered by the fountain near the house, was in part still standing, though some of it had already found its way to the fodder store. About the house there lay a Sunday brightness which was not of the type that can be produced on a Saturday evening in the half-light with a few sweeps of the broom, but which rather testified to a valuable heritage of traditional cleanliness which has to be cherished daily, like a family’s reputation, tarnished as this may become in one single hour by marks that remain, like bloodstains, indelible from generation to generation, making a mockery of all attempts to whitewash them.

The NYT calls it a "dire, bone-freezing short novel" and concludes,

“The Black Spider” is scary as hell, and the evil it portrays with such apparent simplicity seems, in the end, a more complex phenomenon than we might have thought. Throughout, Gotthelf keeps his readers aware of the rhythms of nature, so the awful powers unleashed here seem to arise out of the eternal order of creation, a great storm of evil combining the destructive forces of the natural world and the self-destructive force of human nature after the Fall. He does something only the best horror writers, and the best preachers, can do: he puts the fear of God in you.

The Northwest Review of Books says, "The Black Spider is so densely packed with symbolism and religious imagery that it carries the weight of a much longer novel. As a Christian parable it is predictable and heavy-handed, but as a horror story it is as haunting as the best works of Edgar Allan Poe." Strange Horizons says, "The Black Spider is an unflinching, theologically correct look at what it means to believe in the Christian god."
Posted by Divers and Sundry at 4:00 AM