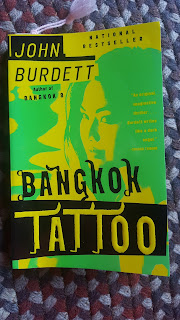 Bangkok Tattoo (2006) is the 2nd in the John Burdett Detective Sonchai Jitpleecheep book series. I found this book used for $3, not having read the 1st in the series, but reading them in order doesn't seem to be a requirement. I'm not a fan and won't seek out others. The characters seem fairly flat to me. The plot is straightforward but not something I found myself anxious to pursue. I found myself not feeling like I was learning about other cultures so much as hearing generalizations and perhaps even stereotypes. On a scale from 1 to 10, where 1 = sentences-arranged-in-paragraph-form and 10 = deathless-prose, let's just say I found this book not getting a very high score. Can you tell I didn't like this book at all? In the end, I didn't finish it.

A farang –a foreigner– has been murdered, his body horribly mutilated, at the Bangkok brothel co-owned by Sonchai’s mother and his boss. The dead man was a CIA agent. To make matters worse, the apparent culprit is sweet-natured Chanya, the brothel’s top earner and a woman whom the devoutly Buddhist sleuth has loved for several lifetimes.

How can Sonchai solve this crime without sending Chanya to prison? How can he engage in a cover-up without endangering his karma? And how will he ever get to the bottom of a case whose interested parties include American spooks, Muslim fundamentalists, and gangsters from three countries?

As addictive as opium, as hot as Sriracha chili sauce, and bursting with surprises, Bangkok Tattoo will leave its mark on you.

The Guardian has criticisms, but says, "Burdett uses the mood behind this uprising ["by Muslim militants against the government"] and the attendant paranoias of the post-September 11 world to drive his plot. It is here that the book works best." The NYT has a mixed review. Strange Horizons also has a mixed review.

Kirkus Reviews concludes, "Baroquely complicated, and a bit too preachy but, otherwise, a wry, wise and wonderful romp." Salon says if you don't like it, you're a "pussy" and too thin-skinned and should "lighten up". Entertainment Weekly gives it a B+ and says, "The first few ”ugly farang” jokes come off, but Burdett overworks them mercilessly in this otherwise smart and fascinating novel."
Posted by Divers and Sundry at 4:00 AM