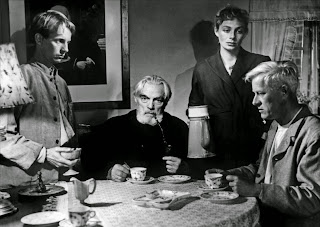 Ordet is an award-winning 1955 Danish film directed by Carl Theodor Dreyer. It centers around the conflicting religious beliefs among the family members in this rural home. One son went mad under the influence of his study of Kierkegaard, thinks he's Jesus, and wanders the house and grounds proclaiming the loss of faith in this age; another son has lost his faith completely, but his pregnant wife and mother of his children comforts him with her belief that his faith will return in due time; and the third son has fallen in love and wants to marry the daughter of the tailor, who is a leader in a local fundamentalist Christian sect and doesn't acknowledge the farmer's family as being Christian.

There are several coffee scenes, one particularly touching one during which the daughter-in-law serves the farmer coffee and home-made cakes to soften him up to accept the younger son's romantic intentions. The father asks, "What's all this? Coffee at this time of day?" and after she has plead her case he says that now he knows why she served the coffee and cake.

It's a beautiful, sensitive, miracle of a film. I'm very glad I discovered this director. I've also enjoyed his The Passion of Joan of Arc (1928) and Vampyr (1932).

Arts and Faith has it on their list of the 100 most spiritually significant films and calls it "one of the most beautifully photographed films ever made". The Guardian concludes, "A film with a hypnotic, irresistible stare."

Senses of Cinema closes with this:


In our digital age, we are being inundated with movies that question the reality of the real and encourage us to retreat into fantasies that have very little to do with the real world, to the point that it is no longer only the ivory tower that doubts the material being of the world. Dreyer’s every frame gives us back a solid, real world. And if, in the minds of many, life is now nothing but a dream, any transcendent encounter with a personal God is now not even a dream; it is a delusion from which we have thankfully awakened. Any belief in the supernatural is relegated to the harmless realm of the personal and subjective. Dreyer’s films, however, all insist that the supernatural is real and ever-present, with or without our consent.

FilmReference.com calls it "an enormously accomplished work of film art". Time Out gives it 5 out of 5 stars and opens its review with this: "'Powerful' doesn't do justice to this 1955 exploration of life, death and faith". Roger Ebert has it on his Great Movies list and says, "The film stands utterly and fearlessly alone." Rotten Tomatoes has a critics score of 100%.

Please join the T Party over at the Altered Books Blog.
Posted by Divers and Sundry at 4:00 AM

Labels: 1001 Movies You Must See Before You Die, Film, Foreign Films, Tea/Coffee, video