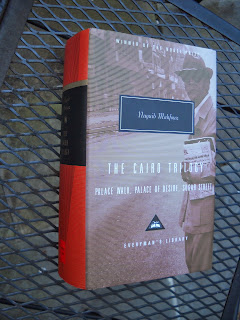 The Cairo Trilogy, completed in 1957, is a novel in 3 books by Egyptian author Naguib Mahfouz. I've been engaged with this work for quite some time and am sad it's ended. I have been immersed in this family through its life over the generations and almost feel like I know them. This book was a joy to read. Please don't be intimidated by the length -my edition is 1313 pages- because it's a well-told story that will fit whatever reading schedule you use. I've spent years reading this, putting it aside when it didn't suit my mood. It always drew me back for more.

"There will be new attacks of pain each time, no matter how many loved ones you lose. You'll die too, leaving your hopes behind you. But life's desirable, even if you suffer from love."

"...how can a grieving heart hope to comprehend..."

"There's no way to catch up with the dear one who has gone on ahead until God decrees it."

from the dust jacket flap:

Naguib Mahfouz's magnificent epic trilogy of colonial Egypt appears here in one volume for the first time. The Nobel Prize-winning writer's masterwork is the engrossing story of a Muslim family in Cairo during Britain's occupation of Egypt in the early decades of the twentieth century.

The novels of THE CAIRO TRILOGY trace three generations of the family of tyrannical patriarch Al-Sayyid Ahmad Abd al-Jawad, who rules his household with a strict hand while living a secret life of self-indulgence. Palace Walk introduces us to his gentle, oppressed wife, Amina, his cloistered daughters, Aisha and Khadija, and his three sons -the tragic and idealistic Fahmy, the dissolute hedonist Yasin, and the soul-searching intellectual Kamal. Al-Sayidd Ahmad's rebellious children struggle to move beyond his dominance in Palace of Desire, as the world around them opens to the currents of modernity and political and domestic turmoil brought by the 1920s. Sugar Street brings Mafouz's vivid tapestry of an evolving Egypt to a dramatic climax as the aging patriarch sees one grandson become a Communist, one a Muslim fundamentalist, and one the lover of a powerful politician.

Throughout the trilogy, the family's trials mirror those of their turbulent country during the years spanning the two World Wars, as change comes to a society that has resisted it for centuries. Filled with compelling drama, earthy humor, and remarkable insight, THE CAIRO TRILOGY is the achievement of a master storyteller.

The Christian Science Monitor says, "It's hard to overstate the rich pleasures found in this trilogy". In a 2012 article, The Daily Beast says, "The series, set against a backdrop of Egypt’s 1919 revolt against the British occupation, was recently reissued—and proves to be quite prescient, almost like a literary companion to the recent uprising." A review at Oprah.com calls it "a 20th-century masterwork equal to those of Joyce and Proust."
Posted by Divers and Sundry at 4:30 AM