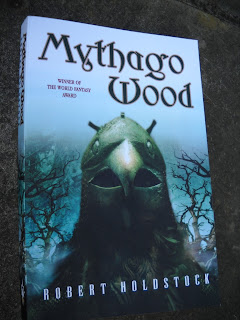 For years I searched for this book by Robert Holdstock, because of all the glowing reports I'd had of it. I looked in both new and used book stores without success and finally gave up and ordered it online. Mythago Wood (1984) is the 1st book in the series and the most acclaimed. It won the World Fantasy Award. I liked it fine, but -having read it- am satisfied and feel no need to read further into the series. Fantasy isn't my favorite genre.

The mystery of Ryhope Wood, Britain's last fragment of primeval forest, consumed George Huxley's entire long life. Now, after his death, his sons have taken up his work. But what they discover is numinous and perilous beyond all expectation.

For the Wood, larger inside than out, is a labyrinth of myths come to life, "mythagos" that can change you forever. A labyrinth where love and beauty haunt your dreams... and may drive you insane.

The review at SFSite.com describes it as "an intelligent modern fantasy set in the years immediately following the end of World War II" and says it "easily ranks among the best and most ambitious fantasy novels of the twentieth century". The Wertzone review calls it "a rich and textured novel about myth which is thought-provoking and densely atmosphere". Graeme's Fantasy Book Review site says, "what we have here is a journey back into pre-history (via that reliable fantasy archetype, the forest) showing us how myths form and perpetuate throughout time."
Posted by Divers and Sundry at 9:00 AM