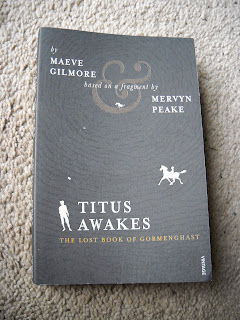 It's all so sad. I remember when I first heard that a Gormenghast sequel had been found squirreled away in the author's attic. Exciting! As I heard more, I found that the sequel was Mervyn Peake's planned 4th and final novel in what I'd always known as the Gormenghast trilogy. Then I heard he hadn't completed it but that his author wife Maeve Gilmore had finished the book and that it had been found in her attic by a daughter (or a grand-daughter, I've read it both ways) after Gilmore's death. Not quite as stunning, but still... Only after I received the book for Christmas did I discover that Peake had left a completed first chapter and an outline. I worried a bit at that point. I read the first chapter with delight and fond memories of when I read Gormenghast long ago.

I wish I'd stopped after that first chapter. The rest of the book was hard to wade through. Although I'm sure Gilmore's work was of deep meaning and satisfaction to her, she did not seek its publication, and I think the Gormenghast legacy was better off without this addition.

from the back of Titus Awakes:

In Titus Awakes the 77th Earl of Groan leaves the crumbling castle of Gormenghast and finds the larger world even stranger than his birthplace.Confronted by elemental and human threats – snowstorms, shipwrecks and attempts on his life – Titus’ bravery is tested and he must fight to free himself from the claims of his past.

Peake began this fourth and final volume of the Gormenghast stories but died having only written a few pages. Using notes and the fragments he left behind, his wife, the writer and painter Maeve Gilmore, has created a richly imagined sequel that fans of The Gormenghast Trilogy will delight in.

Maeve Gilmore’s book is a rather limp curiosity, and to attach it directly to Peake’s oeuvre was not a kindness. Furthermore it is an anorexic version of what Peake had already done in Titus Alone.

The Guardian has an article by their son, who says,

My mother was so moved by the tragedy of his early death, that she wanted to pick up the thread of his imagination and art by continuing the story herself. Little by little as the novel moves on, her voice comes through, so that by the end you are reading Maeve Gilmore, not Mervyn Peake.

The Los Angeles Times calls it "a fascinating, intensely personal homage."
Posted by Divers and Sundry at 6:30 AM