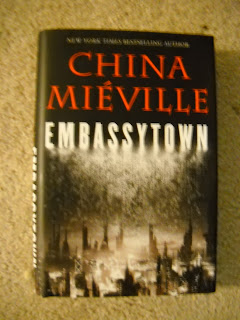 Embassytown by China Miéville is one of several books The Husband got me for Christmas and the first one I've read. It's not my favorite of Mieville's books, but it's up there towards the top. I felt like I was learning a new language as I read -an immersion of a kind- and I enjoyed that process. There were times I felt I should care about something that had happened, when something happened that I thought was meant to be shocking or tragic, and I just did not care enough about the characters for it to matter to me.

China Miéville doesn’t follow trends: he sets them, relentlessly pushing his own boundaries as a writer —and in the process expanding the boundaries of the entire field. Now, with Embassytown, Miéville has crafted an extraordinary novel that is not only a moving personal drama but a gripping adventure of alien contact and war.

In the far future, humans have colonized a distant planet, home to the enigmatic Ariekei, sentient beings famed for a language unique in the universe, one that only a few altered human ambassadors can speak.

Avice Benner Cho, a human colonist, has returned to Embassytown after years of deep-space adventure. She cannot speak the Ariekei tongue, but she is an indelible part of it, having long ago been made a figure of speech, a living simile in their language.

When distant political machinations deliver a new ambassador to Arieka, the fragile equilibrium between humans and aliens is violently upset. Catastrophe looms, and Avice is torn between competing loyalties: to a husband she no longer loves, to a system she no longer trusts, and to her place in a language she cannot speak yet speaks through her, whether she likes it or not.

The Guardian reviewer is Ursula LeGuin, who says,

In Embassytown, his metaphor – which is in a sense metaphor itself – works on every level, providing compulsive narrative, splendid intellectual rigour and risk, moral sophistication, fine verbal fireworks and sideshows, and even the old-fashioned satisfaction of watching a protagonist become more of a person than she gave promise of being.

SF Site says, "The novel joins the shortish list of significant SF novels about linguistics" and closes with this:

it is very good, very thought-provoking, and a true Science Fiction novel in the pure sense. And: more evidence that China Miéville is a writer whose every novel we must await with great anticipation.

Miéville has constructed a breathtaking world of understanding: a new system of measuring time and neologisms that crackle in nearly every paragraph, adding style to the plot

It is impossible not to recommend this book if simply because of the weight of the imagination behind it. The setting is complete, the idea is compelling, and the world too aching for good science fiction. Though not an instant classic as many had hoped, Embassytown is good entertainment and that’s enough.

a novel of ideas — a novel about the philosophy of language, about how language is linked to ethics, and about our “biopolis,” the structure of the links between individual humans and the larger human community.

The Christian Science Monitor closes with this:

"Embassytown" isn't a perfect novel – it is infuriatingly dull and plodding in places – but it's also original, sophisticated, bristling with subversive ideas, and filled with unforgettably alien images.

io9 calls it one of the author's best and says it's "perfectly balanced between escapism and otherworldly philosophizing." Kirkus Review's bottom line: "A major intellectual achievement that, despite all difficulties, persuades and enthralls."
Posted by Divers and Sundry at 6:30 AM