Man Walks Into a Room 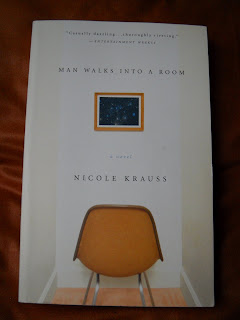 A friend gave me this book some time ago, and it leapt out of the tbr stack and onto my bedside table, being tired of my neglect. It was a quick read but lacked resolution. Perhaps that was intentional. Man Walks Into a Room, the first book by Nicole Krauss, is a 2002 novel about a man who loses all memory from after he was 12 years old as a result of a brain tumor.

The brilliant debut of a new voice in fiction, hailed by Esquire magazine as "one of America’s best young writers."

Samson Greene, a young and popular professor at Columbia, is found wandering in the Nevada desert. When his wife, Anna, comes to bring him home, she finds a man who remembers nothing, not even his own name. The removal of a small brain tumor saves his life, but his memories beyond the age of twelve are permanently lost.

Here is the story of a strikingly intelligent, sensitive man returned to a life in which everything is strange and new. An emigrant in his own life, set free from everything and everyone who once defined him, Samson Greene believes he has nothing left to lose. So when a charismatic scientist asks him to participate in a bold experiment, he agrees. What he gains is nothing short of the beautifully painful revelation of what it means to be a human being.

EW says, "Krauss' prose is casually dazzling, as are the ideas she explores through Samson [the protagonist]" and calls Samson "a thoroughly riveting character." The Village Voice calls it "a chilling addition to the annals of amnesia lit" and says, "It's a novel that grapples with the ephemeral experience of being human". The NYTimes doesn't like it, saying it "fails to unite the myriad thematic strands involving memory and solitude, including many heavy-handed biblical allusions ... into a coherent whole." Kirkus Reviews opens its review with this:

There are some lovely moments (and echoes of early Saul Bellow) in this interestingly conceived first novel, but its somewhat attenuated account of an amnesiac’s quest for his missing years trails off into improbability and inconclusiveness.