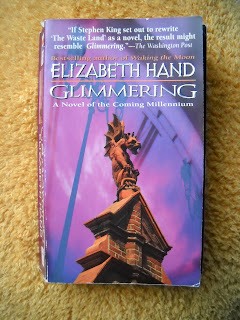 It finally came to an end. Not much happened on the way there, though, and now I just want to move on, hoping Hand's trilogy has more to offer.

Glimmering is a 1997 post-apocalyptic science fiction novel by Elizabeth Hand.

It is 1999. The Last Days, or some say, the First. The climate has warmed dramatically, the cities have imploded into riotous shards, and the sky is a glimmering array of reds and greens and golds.

In fin de siecle New York, a millionaire publisher, a jaded rock star and the girl who, in her own way, loves them both are watching the waters rise as the cults begin the frenzies of the Night of the Thousand Years.

This breathtaking novel is Elizabeth Hand's audacious attempt to capture in one explosive story both the unspoken dreams and the unspeakable nightmares of her generation.

Dave Langford says, "Glimmering is enjoyable to read, though -- full of humanity and wit, lushly told". Infinity Plus is torn but ends up not liking it, saying, "It's as if there are two novels struggling for space here, and unfortunately the wrong one wins." SF Mistressworks says, "Hand has invented lilac prose." Chaotic Compendiums closes with this: "it takes us on a journey through what the end of the end may look like. To quote Kurt Cobain, "Here we are now. Entertain us."" Green Man Review has this:

I suspect that the ending of this story was meant to be transcendent on some level. I'm afraid that by the time it finally happened, the only reaction I could summon up was, "Yeah? So?" Take away the pyrotechnics in the sky and this story could have come out the gay literary establishment in the 1980s: HIV+ protagonist, ex-lover who's the bane of his existence, straight best friend who commits suicide, pretty young boy who's unavailable, a couple of wild parties, lots of introspection on the meaning of it all. The one difference is that Jack has sex with Nellie instead of his new love. Couldn't see that one coming, could we?