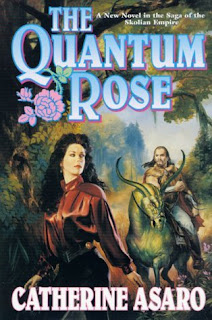 The Quantum Rose by Catherine Asaro is part of the Saga of the Skolian Empire series. I've never read others in the series, but this stands alone just fine. Wikipedia says, "The Quantum Rose is an allegory to the mathematical and physical processes of coupled-channel quantum scattering theory", which is nice and all but far beyond my poor understanding. It's enjoyable on the surface without that understanding, though it does focus on the romantic struggles of the main characters more than i'd like. It won the 2001 Nebula Award for best novel. I'd been looking for it on the shelf of local book stores for years without success but found it at my favorite local used shop recently.

from the fly leaf:

The Saga of the Skolian Empire is Catherine Asaro's trademark SF series. It chronicles the lives of the members of the ruling family of the Empire in the distant interstellar future, weaving a fine blend of action, romance, and hard science fiction.

The Quantum Rose is the story of Kamoj Argali, the young ruler of an impoverished province on a backward planet. To keep her people from starving, she has agreed to marry Jax Ironbridge, ruler of the prosperous neighboring province. But before they can be wed, Kamoj is forced into marriage with a mysterious stranger from a distant planet, throwing her world into utter chaos.

SurLaLune Fairy Tales groups it with re-interpretations of the Beauty and the Beast story, but I don't see it. The review at eyrie.org says,

I like the general pattern of the combined romance and coming of age story, and I'm a long-standing sucker for telepathic love stories. Asaro adds enough of a twist, with a willingness to explore unequal power relationships, a faint touch of the psychology of dominance and submission, and some thoughtful internal analysis of human motivation, to keep me coming back for more.

SF Site says, "The relationship is the heart of the story, yet at the same time Catherine Asaro creates a unique and intriguing world". The Romance Reader also likes all that romance. I think this is an example of that old saying: "them that likes it speaks well of it".

The photo at the top of the post is from Wikipedia and is of the edition of the book I have.
Posted by Divers and Sundry at 6:30 AM