The Wings of the Sphinx 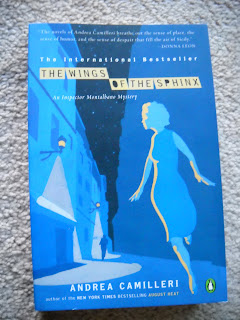 The Wings of the Sphinx, by Andrea Camilleri, is part of a series of detective novels featuring Inspector Salvo Montalbano. There is a website in English here where there is information on the author, his work and the titles available in English. I discovered this series in a used book store, but now I buy the books new.

The death of a Russian prostitute leads Inspector Montalbano behind the facade of a well-connected Catholic charity.

Things are not going well for Inspector Salvo Montalbano. His relationship with Livia is once again on the rocks and-acutely aware of his age-he is beginning to grow weary of the endless violence he encounters. Then a young woman is found dead, her face half shot off and only a tattoo of a sphinx moth giving any hint of her identity. The tattoo links her to three similarly marked girls-all victims of the underworld sex trade-who have been rescued from the Mafia night-club circuit by a prominent Catholic charity. The problem is, Montalbano's inquiries elicit an outcry from the Church and the three other girls are all missing.

The author has a fan club and a Facebook page. Best of Sicily Magazine says the author "stands apart as an entertainer." The Guardian has an article on Camilleri, which says,

The real Sicily lives in his pages - its smells, its tastes (I have already cooked a couple of the dishes Montalbano enjoys most) and, above all, its language. Sicily, in turn, is proud of him. His birthplace of Porto Empedocle, on which Vigàta is based, has changed its name to Vigàta.

Camilleri has made Montalbano famous around the world: more than 10 million copies of the books have been sold. Montalbano is a brilliant cop, of course, but for most addicts it is the volcanic character of the hero and the comedy of his relationships - with his caustic girlfriend Livia, based hundreds of miles away in Genoa but always jetting in at the worst moment, with his lecherous subordinate and drinking companion Mimi Augello, and with his much-abused stomach - that keep them coming back for more.