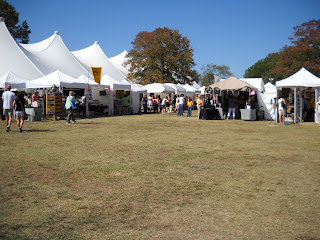 The Pink Palace Craft Fair is an annual event for us. We've been almost every year since they first started having it back in the 70's, then on the grounds of the Pink Palace. That was before I knew my husband. Since sometime in the late 70's I've gone with him, adding children as they came along. This year it was The Husband, The Younger Son, The Daughter (who had to leave early to go to work) and I. The Elder Son went yesterday.

We start the morning with donuts and coffee

and then move on to the booths and tents. There's a stage with music off and on through the day. We don't always eat lunch there, but we did this year. I've never tried to take pictures and had trouble getting anything that showed the scope of the grounds. The photo at the top of this post was taken from the far end of the grounds from the entrance. It's much the same every year but enough different to warrant going every year. Even the one perpetually irritable button jewelry vendor has become a tradition for us.

I bought this mug from Snow Lake Pottery: 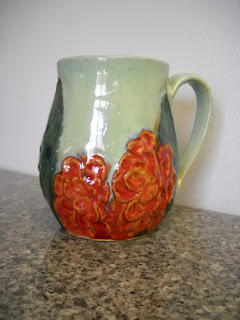 Because I need more mugs.
Posted by Divers and Sundry at 12:30 PM