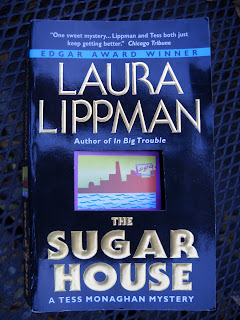 The Sugar House, by Laura Lippman, is 5th in the Tess Monaghan series. You can read an excerpt at the Harper Collins site. I've read Butcher's Hill, and the author gets good press, and I enjoyed this book just fine, but I won't be seeking out more by her. It's a matter of there being just too many other books I'm wanting to read...

A client named Ruthie — who seems to know Tess’s father a little too well — asks the newspaperwoman-turned-p.i. to investigate a year-old “Jane Doe” murder and its grim aftermath. Ruthie’s low-life brother, Henry, confessed to killing a teenager runaway over a bottle of glue — and, a month into his prison term, he met the same fate as his victim. Following a precious few tantalizing clues, Tess sets off on a path that is leading her from Baltimore’s exclusive Inner Harbor to the city’s seediest neighborhoods. But it’s the shocking discovery of the runaway’s true identity that turns her hunt deadly. Suddenly a supposedly solved murder case is turning up newer, fresher corpses and newer, scarier versions of the Sugar House — places that look sweet and safe ... but only from the outside.

The Chicago Tribune closes its positive review with this praise:

What makes "The Sugar House" so satisfying is the complexity of plot and character. This is the fifth entry in an already admirable mystery series, and Lippman and Tess make the deserved transition from paperback to hardcover with ease. Both just keep getting better.

There's a fascinating video at youtube in which Lippman sheds light on "her mysterious Baltimore":