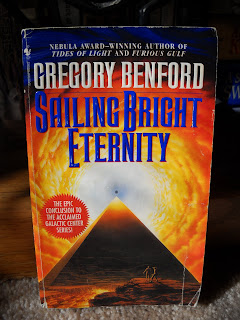 The Galactic Center Saga by Gregory Benford is another example of a series it has taken me forever to read. I bought them as I found them, but it took years before I picked them all up, and by then I had completely forgotten the ones I had read earlier. I read Sailing Bright Eternity (6th and last in the series) while Mother was in the hospital, and I enjoyed it even though I'd forgotten the rest of the series.

The final chapter of humanity's future has begun. And three men hold the key to survival. As the fierce, artificially intelligent mechs pursue their savage and unstoppable destruction of the human race, it soon becomes apparent that these three men-three generations in a family of voyagers-are their targets. Toby Bishop, his father, Killeen Bishop, and his long-dead grandfather each carry a piece of the lethal secret that can destroy their relentless pursuers. There's only one problem: they have no idea they possess the only weapon that can save humanity.

Kirkus Reviews closes its review with this:

Extravagantly, mind-bogglingly strange yet it's the well-realized characters as much as Benford's astounding inventiveness that propel this amorphous drama to its utterly fascinating conclusion.

Posted by Divers and Sundry at 9:30 AM