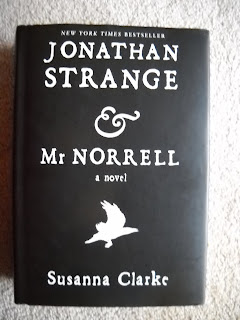 There are 2 mentions of Methodists. The first is early on, describing a man in Mr. Norrell's library:

Mr. Honeyfoot meanwhile, his hands in the air like a Methodist praising God, was walking rapidly from bookcase to bookcase; he could scarcely stop long enough to read the title of one book before his eye was caught by another on the other side of the room.

The second is in the middle of the book in a passing mention that a certain man could most certainly not have been drunk because he "is a Methodist preacher."

"Two magicians shall appear in England.
The first shall fear me; the second shall long
to behold me..."
The year is 1806. England is beleaguered by the long war with Napoleon, and it is hundreds of years since practical magic faded into the nation's past. But scholars of this glorious industry suddenly discover that one practicing magician still remains: the reclusive Mr Norrell of Hurtfew Abbey. Challenged to demonstrate his powers, Norrell causes the statues of York Cathedral to speak and sing, and sends a thrill through the country. The magician proceeds to London, trailed by excited rumors, where he raises a beautiful young woman from the dead and finally enters war, summoning an army of ghostly ships to terrify the French.

Yet Norrell is soon challenged by the emergence of another magician: the brilliant novice Jonathan Strange. Young, handsome, and daring, Strange is the very opposite of cautious, fussy Norrell. Still, Norrell agrees to take Strange as his pupil, and the young magician joins England's cause, enduring the rigors of Wellington's campaign in Portugal to lend the army his supernatural skill on the battlefield.

But as Strange's powers grow, so do his ambitions. He becomes obsessed with the founder of English magic, a shadowy twelfth-century figure known as the Raven King. In his increasingly restless pursuit of the wildest, most perilous forms of magic, Strange risks sacrificing not only his partnership with Norrell, but everything else that he holds dear.

Elegant, witty, and flawlessly detailed, Jonathan Strange & Mr. Norrell is a magisterial first novel that draws readers into Susanna Clarke's fantastic and utterly convincing vision of a past world.

SFReviews.net calls it "Breathtakingly original" and says that "as a storyteller, Clarke simply knocks you off your feet." SF Signal gives special praise to the world building. The SF Site review closes by saying,

I'm afraid I've now become one of those people who go on and on about how great a certain book is. I've been trying to convince my customers to buy it, trying to convince them not to be turned off by how fat Jonathan Strange & Mr Norrell is. 'I've heard a lot about this book,' they say, 'can it really be as good as all that?' Yes, I tell them, it can.