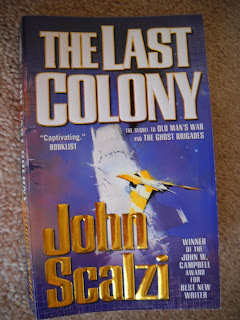 The Last Colony is the 3rd in a series by John Scalzi. I have enjoyed all of these, but I don't plan on reading the 4th one. That whole retell-the story-from-another-character's-viewpoint turns me seriously off.

The author discusses the book here:


from the back of the book:

John Perry, the hero of John Scalzi's bestselling debut novel Old Man's War has retired with his wife and daughter to one of humanity's many colonies. It's a good life, but something's ... missing. When John and Jane are asked to lead a new colony world, they jump at the chance to explore the universe once more.

But nothing is what it seems. Perry and the new colony are pawns in an interstellar game of diplomacy and war between humanity's Colonial Union and a new, seemingly unstoppable alien alliance that has demanded an end to all human colonization. As those gambits rage above, on the ground Perry struggles to keep his colonists alive in the face of threats both alien and familiar.

For his family's survival, and everyone else's, Perry must unravel the web of lies, half-truths, and deception spun around him and uncover the colony's shocking true purpose - lest it become, truly, the last colony of the human race.

SF Signal says it "lives up to the reputation of the previous books."
SFReviews.net describes it as

largely an exegesis on imperialism, and how expansionist politics ultimately serve to perpetuate the notion of imperialism for its own sake instead of looking out for the welfare of the actual people it presumes to serve.