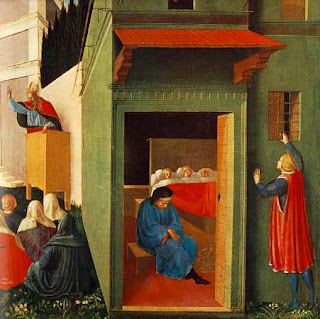 Today is the Feast of Saint Nicholas, and a great feast it is indeed! A joyful day in Advent when we wake to find our stockings full of goodies. We have celebrated this day by hanging our stockings on St. Nicholas Eve ever since the kids were babies.

The picture above is a detail from the Perugia triptych by Fra Angelico. This section illustrates the story of Saint Nicholas providing financial means for 3 girls without dowries.

The relics of Saint Nicholas are located in the basilica in Bari.

There is some music specific to the day. In 1948 Benjamin Britten wrote Saint Nicolas, which tells the life of Saint Nicholas in nine scenes. The wikipedia entry on him is here.

Anonymous 4 has a CD Legends of St. Nicholas: of Medieval Chant and Polyphony. There is some old English here but most is in Latin. There are readings as well as chants and songs. The booklet included with the CD has the words, explanatory text and some beautiful pictures.

St. Nicholas and the Tub, written by Brian Burland, a Bermudan novelist, illustrated by Joseph Low, begins with "A Note to the Reader". It includes these words:

Exactly what Nicholas, Bishop of Myra, did, wrote or said, we do not know. But we do know that some poignant essence of the man and the life inspired, among other things, the happy tradition of giving in secret. We know also that the earliest paintings of St. Nicholas, some of which date back to the ninth century, depict him sstanding in a tub with three children at his side. We do not know why they are in the tub, although there have been various interpretations.

This story, which is meant to be read aloud, is a flight of fancy that relates a way St. Nicholas and the children may have got into that tub.

A Gift From Saint Nicholas, adapted by Carole Kismaric and illustrated by Charles Mikolaycak, has this description on the front dust jacket flap:

When Cecile sees the wonderful chocolate ship in Trinchen Mutser's candy shop, she dreams that it will be hers on Saint Nicholas Eve. Maybe, she thinks, if she can stay awake, she'll catch the ship as it sails down her chimney.

Alas, the chocolate Congo does not come to Cecile so easily. When Saint Nicholas and his assisant Ruprecht reach her house, they discover they have run out of presents...

The Baker's Dozen, A Saint Nicholas Tale, retold by Aaron Shepard and illustrated by Wendy Edelson, tells how Saint Nicholas teaches a baker to count. from the dust jacket:

The honest baker Van Amsterdam gives his customers exactly what they pay for -not more and not less. He is noted for the delicious Saint Nicholas gingerbread cookies he makes for the saint's feast day in December. Van Amsterdam carefully counts out twelve cookies for each customer who orders a dozen -until the day when a strange old woman asks for a dozen cookies and insists that a dozen is thirteen. But the baker will not agree. "Your heart is small, and your fist is tight," she tells the ungenerous Van Amsterdam as she leaves the cookies behind. "Fall again, mount again, learn how to count again!" From that moment everything goes wrong in Van Amsterdam's shop -until Saint Nicholas himself sets things straight. The Dutch colonial tale of Saint Nicholas and the baker's dozen is one of America's oldest and most beloved legends.

There is a short life of St. Nicholas told in narration and pictures here:

Posted by Divers and Sundry at 5:00 AM