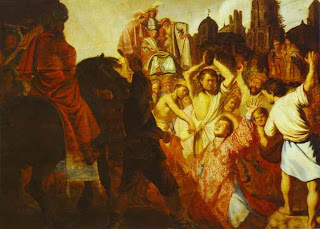 Today is the Feast of Stephen, first Christian Martyr. The picture above is of Rembrandt's The Stoning of Stephen. You can read more about St. Stephen here, and you can read the account of his stoning in the Bible in the book of Acts. A portion of that account is here:


Stephen, full of grace and power, did great wonders and signs among the people. Then some of those who belonged to the synagogue of the Freedmen (as it was called), Cyrenians, Alexandrians, and others of those from Cilicia and Asia, stood up and argued with Stephen. But they could not withstand the wisdom and the Spirit with which he spoke. Then they secretly instigated some men to say, "We have heard him speak blasphemous words against Moses and God." They stirred up the people as well as the elders and the scribes; then they suddenly confronted him, seized him, and brought him before the council. They set up false witnesses who said, "This man never stops saying things against this holy place and the law; for we have heard him say that this Jesus of Nazareth will destroy this place and will change the customs that Moses handed on to us." And all who sat in the council looked intently at him, and they saw that his face was like the face of an angel.

Then the high priest asked him, "Are these things so?"

And Stephen replied: "Brothers and fathers, listen to me. You are forever opposing the Holy Spirit, just as your ancestors used to do. Which of the prophets did your ancestors not persecute? They killed those who foretold the coming of the Righteous One, and now you have become his betrayers and murderers. You are the ones that received the law as ordained by angels, and yet you have not kept it."

When they heard these things, they became enraged and ground their teeth at Stephen. But filled with the Holy Spirit, he gazed into heaven and saw the glory of God and Jesus standing at the right hand of God. "Look," he said, "I see the heavens opened and the Son of Man standing at the right hand of God!" But they covered their ears, and with a loud shout all rushed together against him. Then they dragged him out of the city and began to stone him; and the witnesses laid their coats at the feet of a young man named Saul. While they were stoning Stephen, he prayed, "Lord Jesus, receive my spirit." Then he knelt down and cried out in a loud voice, "Lord, do not hold this sin against them." When he had said this, he died. (Acts 6:8-7:2a,51c-60, NRSV)


It is on this day that the events in the Christmas Carol "Good King Wenceslaus" take place. You can read a bit about the author and composer of the song here and hear it sung here:

Good King Wenceslaus looked out on the feast of Stephen,
When the snow lay round about, deep and crisp and even;
Brightly shone the moon that night, though the frost was cruel,
When a poor man came in sight gath'ring winter fuel.

"Hither, page, and stand by me, if thou know'st, telling,
Yonder peasant, who is he? Where and what his dwelling?"
"Sire, he lives a good league hence, underneath the mountain;
Right against the forest fence, by Saint Agnes' fountain."

"Bring me flesh, and bring me wine, bring me pine logs hither:
Thou and I will see him dine, when we bear them thither."
Page and monarch, forth they went, forth they went together;
Through the rude wind's wild lament and the bitter weather.

"Sire, the night grows darker now, and the wind blows stronger;
Fails my heart, I know not how, I can go no longer."
"Mark my footsteps good, my page. Tread thou in them boldly:
Thou shalt find the winter's rage freeze thy blood less coldly."

In his master's steps he trod, where the snow lay dinted;
Heat was in the very sod which the saint had printed.
Therefore, Christian men, rejoice, wealth or rank possessing,
Ye who now will bless the poor, shall yourselves find blessing.


St. Wenceslaus was himself a martyr. There is more information about him here.

(above photo from wikimedia commons)

Posted by Divers and Sundry at 7:11 AM