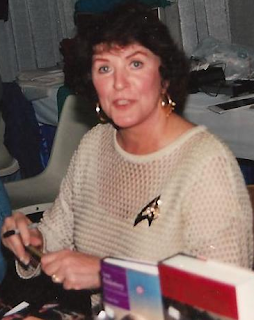 This came as a shock. Majel Roddenberry has died. I saw the news at /film where it says she

died today of leukemia at her home in Bel-Air at the age of 76. She went peacefully and was surrounded by her son Eugene “Rod” Roddenberry Jr and family friends.

I remember her from my elementary school days when I was a beginning fan of the first Star Trek series.

In a more enlightened age, Majel Barrett Roddenberry might have rated a Federation command. As it was, she helped rule the Star Trek universe.

There is very sad news today in the Star Trek world. Majel Barrett-Roddenberry, widow of Gene and known to fans as Nurse Chapel, the original Number One, Lwaxana Troi, and of course the voice of just about every Federation computer in every show and movie, has passed away at age 76.

The photo at the top of the post is from Wikipedia.
Posted by Divers and Sundry at 2:51 PM