Warhol at the Brooks We went to the Memphis Brooks Memorial Art Gallery today to see the Warhol exhibit. We hadn't been there long when a tour started, so we tagged along behind them. The tour guide was great, adding lots of historical information and explaining how some of the art was created. The Younger Son's favorite pictures from this exhibit were Red Lenin (which was a much brighter red than is shown in the linked picture) and Ingrid Bergman (the one of her in the hat from Casablanca).

We went through the "Pop" exhibit of works from the permanent collection that had been selected to complement Warhol. I was thrilled to see my favorite piece on display: The Family by Marisol, pictured here: 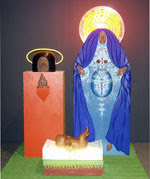 This work was commissioned for the Brooks, and I remember when it was first installed. It isn't often on display, so I was so excited to be able to sit with it a while.

We also looked through the permanent exhibit, or the small portion of the permanent exhibit that is currently on display. It has been a long time since we last did this. The Younger Son had a couple of particular favorites here, too: Sir Henry Raeburn's Portrait of Charles Gordon, Fourth Earl of Aboyne (c. 1785) and Joseph Pennell's Sunset from Williamsburg Bridge (1915). I can't find the first of these online anywhere, but here's the Pennell: 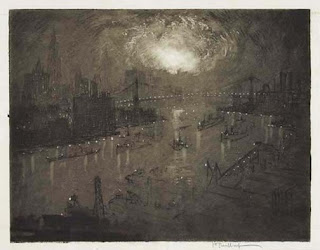 They had an 11 minute 1920 video named Manhatta running in the exhibit hall. I didn't watch it there, but I'm guessing this is the film:

If the car hadn't overheated on the way home the trip would have been perfect.
Posted by Divers and Sundry at 1:00 PM