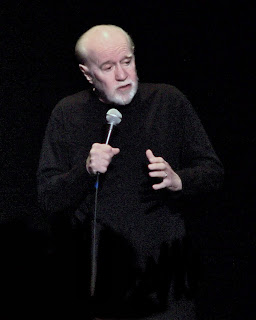 LOS ANGELES -- Acerbic standup comedian and satirist George Carlin, whose staunch defense of free speech in his most famous routine "Seven Words You Can Never Say On Television" led to a key Supreme Court ruling on obscenity, has died. Carlin, who had a history of heart trouble, went into St. John's Health Center in Santa Monica on Sunday afternoon complaining of chest pain and died later that evening, said his publicist, Jeff Abraham. He had performed as recently as last weekend at the Orleans Casino and Hotel in Las Vegas. He was 71.

WASHINGTON (AFP) — Irreverent US comedian George Carlin, who became known as a voice of the 1970s counterculture and was one of the country's best known funny men, died on Sunday aged 71, US media reported.

Despite his bad-boy reputation, the stand-up comic hosted Saturday Night Live and made more than 100 appearances on The Tonight Show. His counterculture take on the world's sorry state of affairs filled 23 comedy albums, 14 HBO specials and three books. Carlin won four Grammy Awards for best spoken comedy album, and it was announced Tuesday that he would be awarded the 11th annual Mark Twain Prize for American Humor.

He had been the victim of several heart attacks and had a history of heart disease, "ET" online reported.

The photo above is by Bonnie and is from Wikipedia.
Posted by Divers and Sundry at 5:17 AM