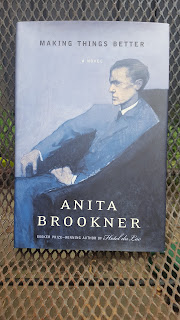 Making Things Better is a 2002 novel by Anita Brookner. Brookner died this past March 10 at the age of 87. I always love her books. I love her writing, her plotting, her characterizations... I always feel like I know her characters, as if they are real people. This book is no exception.


The Booker Prize-winning author of The Bay of Angels and Hotel du Lac, "one of the finest novelists of her generation" (The New York Times), now gives us a masterly new novel about the self-discoveries that come with maturity, and the eternal question confronted by people of all ages: What will I do with the rest of my life?

In this richly written, emotionally revealing novel, Brookner once again "works a spell on the reader" (The Washington Post Book World), as a man finds himself contemplating the difficult life questions: How is it all going to work out? What shall I do before the end? As Herz ponders proposing marriage to an old friend, making a trip to Paris to see a favorite painting, selling his home, moving, starting afrsh, he knows that he must do something with his remaining years. But what?

Brilliant, funny, profound, Making Things Better captures the quanries of aging: the misunderstanding of of an increasingly modern, alien world; awkward conversations with passersby; even more awkward encounters with longtime friends and acquaintances; the anxieties posed by age and uncertainty -and the bizarre, magnificent self-knowledge that perhaps only age, reflection, and experience can bring.


All the deaths were natural, yet all had an aura of horror. It was their lives rather than their deaths that were regrettable, and all the frustrated love that had failed to sweeten their end.

Solitude had bred a stoicism which he hoped would see him through.

"Of course I'll be lonely. But there's a loneliness that comes with age anyway. There's nothing I can do about that.

Herz arranged the photographs on his desk, intent on examining what the past had contributed to his strange joyless present. He looked around the room to see if it were ready to welcome in some impossible but unknown, unhoped-for guest, saw that it was, as ever, immaculate, and with a sigh turned to the mute oblongs he habitually kept in a folder, in a suitcase, obscurely, and which he was now resigned to concealing forever. He felt a distaste, but also a curiosity that always accompanied this particular investigation: the photographs, of no conceivable relevance to anyone he currently knew, were to him a painful record of people whose hold on his affections had dwindled to almost nothing.

Yet he was bound to those people, had been formed by them, had now exhausted their legacy, such as it was, and considered himself the recipient of their various discontents, in comparison with which his own seemed somehow lightweight. It was a feeling of unworthiness, as if he had somehow got off scot-free, that contributed towards his ambivalence. Even the photographs served as a reminder of complicated familial unhappiness. He did not intend to look at them again, would put them away forever, to be thrown away after his death with the rest of his belongings, but conceived it as a duty to pass them once more in review before locking them away in the suitcase which would in turn take its place in the basement room he shared with others...

Women aged as best they could, he supposed. He had not given the matter much thought. But age was a grievous business for everyone.

"There comes a time in a woman's life when she no longer wants to make an effort, wants to let her hair go, wear comfortable shoes, stop trying to attract men. And yet there's a sadness in this. You lose a future."


For days after I finished the novel, I kept thinking about Julius Herz, as if he were someone I knew. Part of the reason he had such an effect was that Brookner never delivers a verdict on him: characteristically, she leaves that up to the reader. ... All she does is tell her stories. With her unfashionable restraint, with the glow of unshowy intelligence on every page she writes, with the brevity and directness of her novels, and with her self-effacing willingness to put her imagination entirely at the service of the story she's telling, Brookner is an artist of an exceptional purity.


Brookner's gentle exploration of Julius's emotional dilemma is pursued with exquisite precision and empathy. In her novels, fate is cruel and hope of happiness a chimera, yet her characters are so fully realized that one feels the beat of life in their veins and longs for them to yield to their stifled urge for freedom.

Kirkus Reviews describes it as "Another intelligent, emotionally wounded protagonist muses on a life consumed by others’ expectations".
Posted by Divers and Sundry at 4:00 AM