Body of a Girl

Body of a Girl is the debut novel by Leah Stewart. I admit I gave up on this one in some frustration fairly quickly. I picked it up because it takes place in Memphis, and I put it down -in part- because it was supposed to be taking place in Memphis. I wish the author had placed the book in a city with which I was unfamiliar or which she knew better. She mentions a few place names: Tom Lee Park, Midtown, Beale Street, the Peabody Hotel, the Pyramid... but even so, I had trouble placing the action here in Memphis. It's almost as if she'd never been here but had been given a rough geography, a few place names, and some vague generalizations about the city. It reminds me a bit of watching Memphis Beat, but picking out mistakes in that show was fun.

I was frustrated by her focus on the heat. The book takes place in June (or at least begins in June); and the word "heat" appears with undue frequency (every other page, to begin with with), and that doesn't include mentions of sweat, humidity, steam, efforts to deal with the heat, discomfort because of the heat.... It's not presented as an anomaly or a freak heat wave but as almost a character in its own right. I've never known it to be hot enough in June to warrant this kind of dedicated focus in a story that wasn't about the heat. Maybe the reporter is just delicate, sensitive to the heat?

She doesn't name the newspaper, but we only have one daily. I've never known a time where the reporter tasked with covering murders would've been a 25-year-old female "novice crime reporter" with no connections inside the police department. It just didn't ring true. Of course, the book was written 16 years ago, but still...

Some of her descriptions of un-named places didn't sound like places that I generally see here. I found her take on Graceland slightly off somehow. Oh, I don't know... It just didn't feel like Memphis to me.


In the Memphis summer, the heat clings heavily like a second skin. Olivia Dayle's job as a novice crime reporter is at once surreal -stepping into and out of strangers' lives with her notebook- and all too real. Partly out of gutsy ambition to get a front-page story and partly to reassure herself that this could not have been a random act, Olivia becomes determined to find out who the murderer of Allison Avery was. As she grows more and more obsessed with Allison, Olivia begins to shuck off her own cautious self and become everything she believes Allison was: charismatic, vivacious, and unafraid. She, too, begins to flirt with living as close to the edge as possible, with nearly tragic consequences. Taut and suspenseful, Body of a Girl is a powerful story of a young woman venturing into the unknown and questioning all her choices.

Now, on to more pleasant considerations.....

It's been over 3 weeks since I got this horrible respiratory virus, and I'm still coughing but am definitely on the mend. It's fun to be back for T Tuesday. The picture I'm sharing today has nothing to do with the book I talked about above but was painted by Russian artist Konstantin Ivanovich Gorbatov who died on this date in 1945: 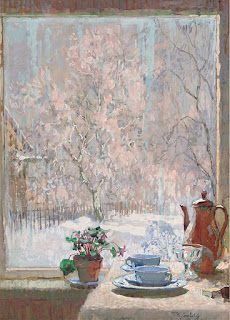 Coffee by the Window was painted in the year of his death.

Please join the folks enjoying the weekly T Party over at Bleubeard and Elizabeth's blog.