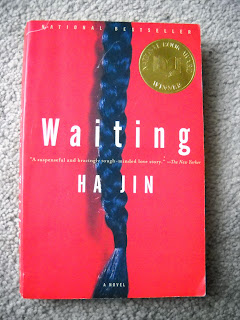 Waiting is a 1999 National Book Award-winning and PEN/Faulkner Award-winning novel by Ha Jin. This one is worth looking for. Interesting plot, well-developed sympathetic characters, description that places you right there in these people's lives...


The demands of human longing contend with the weight of centuries of custom in acclaimed author Ha Jin's Waiting, a novel of unexpected richness and universal resonance. Every summer Lin Kong, a doctor in the Chinese Army, returns to his village to end his loveless marriage with the humble and touchingly loyal Shuyu. But each time Lin must return to the city to tell Manna Wu, the educated, modern nurse he loves, that they will have to postpone their engagement once again. Caught between conflicting claims of these two utterly different women and trapped by a culture in which adultery can ruin lives and careers, Lin has been waiting for eighteen years. This year, he promises, will be different.


A good marriage was full of moments of cats and dogs. It was the uneventful marriage tha was headed toward disaster. In a word, the differences between the husband and the wife should only help stabilize their marriage.

Things Asian opens with this: "Winner of the 1999 National Book Award for Fiction, Ha Jin's Waiting is as universal, and deceptively simple as a fable, as gentle and innocent as a bedtime story." Kirkus Reviews closes by saying, "A deceptively simple tale, written with extraordinary precision and grace. Ha Jin has established himself as one of the great sturdy realists still writing in a postmodern age." Publishers Weekly says, "this poet and award-winning short story writer can deliver powerful long fiction about a world alien to most Western readers."
Posted by Divers and Sundry at 4:00 AM